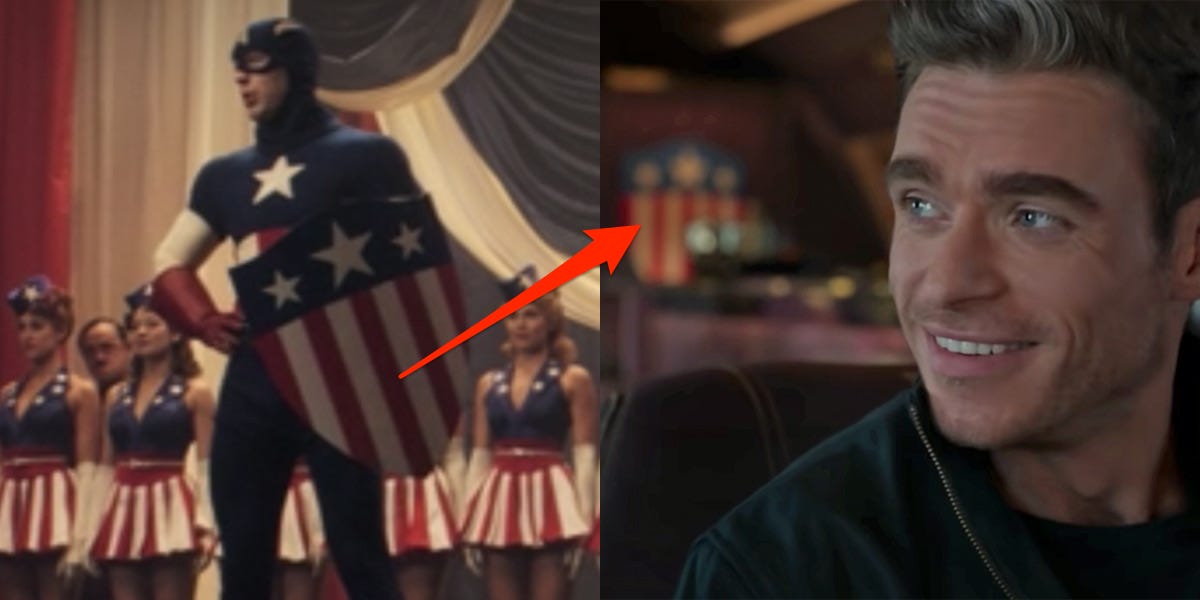 In the comics, Domo is an Eternal on Olympia who works directly with the leader of the Eternals, Zuras. Neither of them appear in the Marvel movie.

Here, the ship is named after the character.

In “Eternals,” Phastos’ son Jack mistakes Ikaris for DC’s Man of Steel, because they both can fly and shoot lasers out of their eyes.

In an interview with French outlet jeuxactu.com, which has been translated, director Chloé Zhao said Snyder’s interpretation of the hero inspired her the most because of his approach to the myth in an authentic way.

She added that “Ikaris is of course our own take on Superman.”

Special name signs were created for the Eternals by one of the stars, Lauren Ridloff, and her husband, Douglas.

Douglas Ridloff worked on the film as its American Sign Lanuage consultant. Lauren Ridloff told Fandango how the two came up with quick ways to sign the names of Eternals.

“We had worked in collaboration, my husband and I, coming up with different name signs for each of the characters,” Ridloff said, adding that the duo incorporated some Easter eggs into two of the signs as nods to Douglas and one of their two sons.

“Kingo, obviously, it’s based on his power. He shoots lasers, he has laser guns, and then he also is a Bollywood dancer,” said Ridloff. “It also happened to be the name sign of my youngest son, Wyatt.

“It’s really close to the ear and we picked that because I don’t know if you could see in the movie, but Makkari tends to wear a lot of earrings,” Ridloff said of her character’s name sign. “In real life, that happened to be the name sign for my husband.”

In the original “Eternals” comic, many of the film characters were originally men.

Ajak, Makkari, and Sprite were all male characters in the original comic run.

By gender-flipping their characters, the film introduces five male and five female superheroes to the MCU.

Producer Nate Moore told Screen Rant the decision to change a character’s gender was always specific to their story.

“Sprite, the boy who never grew up, is something you’ve seen a lot,” said Moore. “The girl who never grew up seems to be a little bit of a fresher idea, so it’s just those creative conversations to create a balance that we thought was interesting.”

The Eternals are seen in Tenochtitlan during the fall of the Aztec Empire.

In the original comic run, Ajak needed to be awaken from a tomb inside of the Aztec Empire.

There, Ajak was believed to be an Incan hero named Tecumotzin.

Kingo is a Captain America fan.

The first version of Cap’s shield (or a replica of it) can be spotted on his jet.

It’s funny that Kingo has this version of the shield since Steve Rogers used it when he was simply an actor for the government’s war propoganda. In “Eternals,” Kingo is a famous Bollywood actor.

Kingo made a group of “Shadow Warrior” movies, hinting at a superhero group.

In the comics, there is a group of heroes called the Shadow Warriors who were created as the last hope against the threat of the X-Men character Apocalypse.

Thena mentions the demise of Centuri-Six.

It’s one of the planets they destroyed before coming to Earth to help birth a Celestial.

Centuri-Six is a planet mentioned in Thor issue No. 258. There, we learn from one of its citizens, Gormok, that the planet was raided by a criminal named Grey Gargoyle and his pirate ship.

He imprisoned the planet’s peaceful people made up of philosophers and artisans on his ship where they lived out their days as slaves.

Ikaris asks Phastos if his table is made out of Vibranium before slamming his fist onto it and breaking it.

Vibranium, one of the strongest metals on the planet, is from Wakanda. Black Panther’s suit is made of vibranium.

Makkari and Druig’s costumes purposefully have more red in them.

According to the film’s production notes, the costume team, led by costume designer Sammy Sheldon Differ, looked at minerals, nature, rocks, nebulas, and the cosmos to inspire the look of the superhero suits seen in the film.

Six suits were made for each character. As they go through time, the suits have subtle changes which may be difficult to notice on a first watch. For instaance, Druig’s costumes become darker as the film progresses through time. Thena’s costume becomes “more fragile and soft.”

“The more rebellious characters like Druig and Makkari have red in their costumes that no one else has. The leaders, Ajak and Ikaris, tend to veer more towards blue,” producer Nate Moore said in the film’s production notes. “We tried to have general principles for how we dressed people. Some of that is inspired by comics, like Ikaris is in blue in the comics. Thena is in gold in the comics.”

When they reboard the Domo late in the film, Sprite asks Thena if she found the Ebony Blade.

As the Eternals look over the items Makkari has acquired on the Domo over the years, Thena finds a sword, which Sprite mistakes for the Ebony Blade.

We later see the Ebony Blade in the film’s second end-credits sequence. Dane Whitman (Kit Harington) opens a box to find the cursed sword inside.

Harington told Insider he was “excited that Dane comes into contact with this sword,” adding that he thought it was a “really strong ending to the movie.”

“It makes me want to see what’s next, and the fact that might include me is exciting,” Harington said.

Kro tells Thena that she has changed, implying that the two knew each other.

In the comics, the two had an intimate relationship. Kro sometimes aligned with the Eternals because of his love for Thena. That’s not explored in “Eternals.”

It feels hinted at in the film that there may have been some sort of connection between the two that wasn’t explained.

Bill Skarsgard, who played Pennywise the Clown, was the voice of Kro.

If the voice of the Deviant sounded familiar, it belonged to the “It” and “Deadpool 2” star.

At the film’s end, Arishem says he will return to Earth to decide whether or not he will spare the planet.

Arishem, the Prime Celestial, tells Sersi, Phastos, and Kingo that he will return to the planet for judgment to see if it should be destroyed.

In the comics, Arishem stands still on a pylon for 50 years to judge whether or not humanity is worth saving. If he decides they’re not worthy, he’ll simply destroy the planet and all of its inhabitants.

Circles within triangles are used on the ship and throughout the film as a symbol of unity. Stewart studied meteors at the Science Museum in London to work with her team to make the interior of the ship look like the inside of a meteor.

“We worked really hard at the textures so that it looked like the inside of a meteor and truly ancient,” Stewart said in the film’s production notes. “I was really excited to see some space dust that had arrived on a small meteor that was seven billion years old and had recently been discovered. It was the same color.”

A character named Pip the Troll appears in the first end-credits scene to introduce Starfox.

You may have been too stunned by Harry Styles’ unexpected cameo as Thanos’ brother to realize that the comedian was voicing Starfox’s comrade.

The mystery voice at the film’s end belongs to the Vampire hunter Blade.

Zhao confirmed to Fandom it was the voice of Oscar winner Mahershala Ali who was previously announced to play Blade at 2019’s San Diego Comic-Con.

An untitled “Blade” reboot is currently in the works at Marvel with no release date attached. 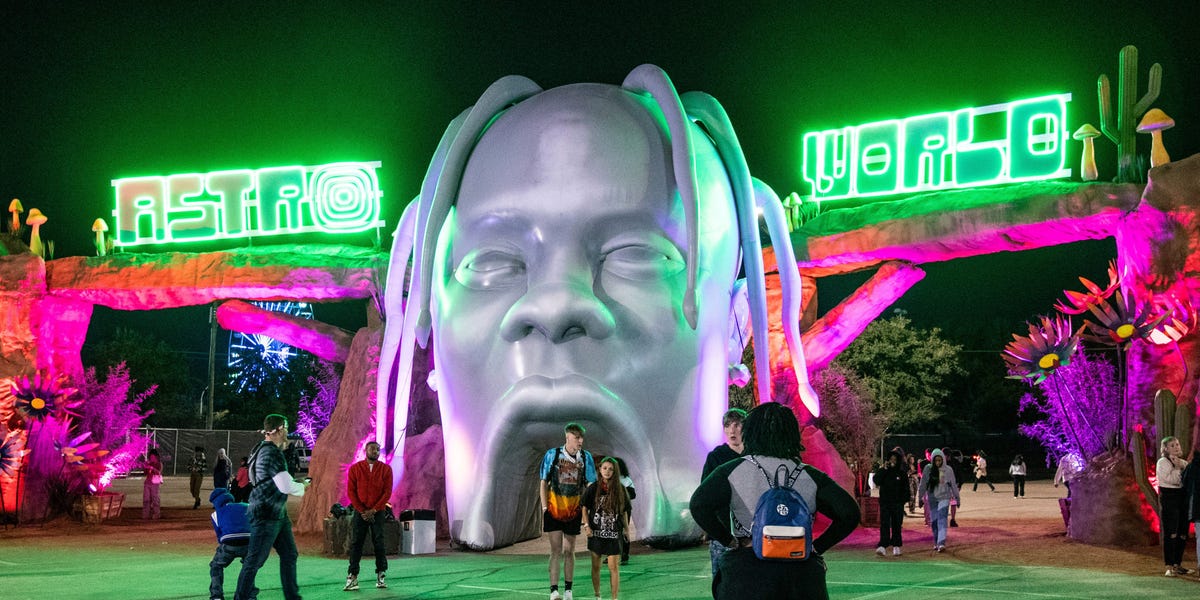 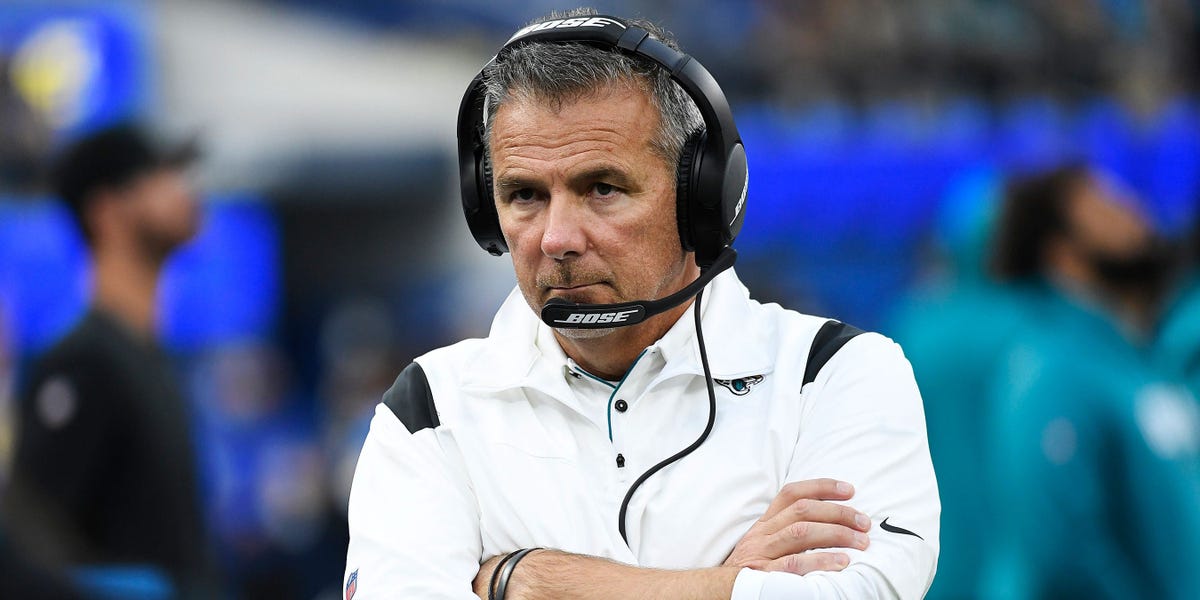 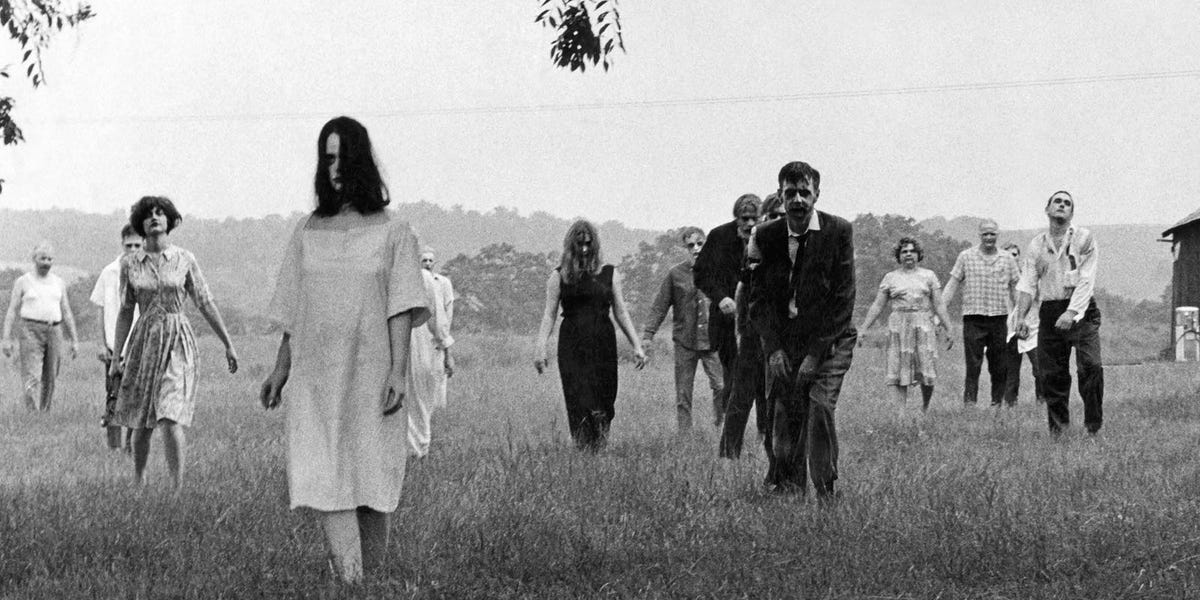 How Zombies in Movies and TV Have Evolved Into Superhuman Monsters