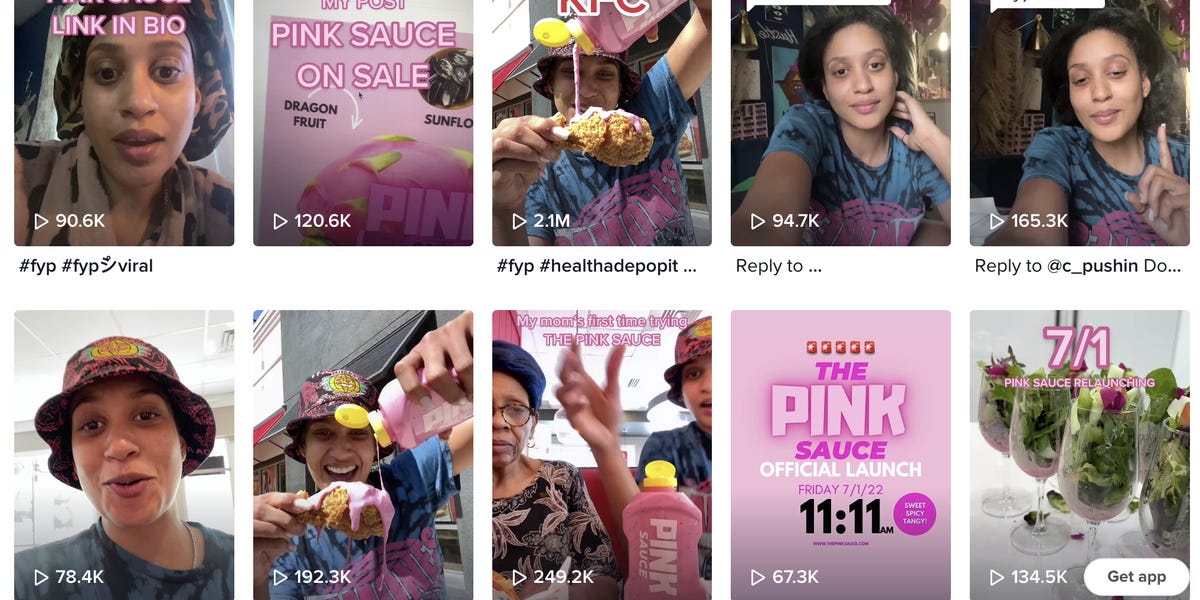 A bright pink condiment bottled and sold by a TikTok chef has been the subject of memes and scrutiny across social media for its mysterious ingredients, unknown taste, seemingly nonsensical nutrition facts label, and its unconventional appearance.

The substance, appropriately dubbed “Pink Sauce,” is the product of food content creator Carly Pii, who has since June 11 promoted the product on her social-media pages. In reviews touted by Pii, the product has been described as “sweet, savory, and seasoned.” Others who said they ordered and tried the sauce described the condiment as “watery,” “thin,” and like “colored ranch.”

Pii, who has 57,000 followers on her TikTok page @chef.pii, and a couple thousand YouTube subscribers, in June started advertising the sauce featuring supposed reviews from the public, videos of her dipping chicken in the fluorescent pink condiment, and videos that emphasized the sauce was both “natural” and “edible.”

The sauce costs $20 plus additional shipping charges (placing an order of the sauce to Insider’s New York offices, for instance, would result in an additional charge of about $11). A graphic on the pink sauce website says its ingredients include sunflower seed oil, dragon fruit, honey, chili, and garlic.

Pii’s TikTok videos promoting the sauce range in views with some having been viewed millions of times. A July 30 video showing Pii drenching a KFC drumstick in the pink liquid has amassed 2.1 million views. Another video showing the sauce used on chicken wings from WingStop has been viewed 3.6 million times since it was posted June 26.

In a June 27 video posted to TikTok, Pii claimed 100 preorders for the sauce had sold out. The sauce officially launched at 11:11 a.m. on July 1, according to Pii. She has since posted several videos showing supposed orders for the product. In a video posted Monday, Pii said she shipped 1,000 orders in a single week.

Backlash and questions about food safety

Some creators turned to TikTok to complain that their Pink Sauce had arrived in bad condition or the bottles had arrived broken. Viewers of Pii’s videos have noted the sauce appeared to vary dramatically in color — at times appearing hot pink while sometimes appearing pale. Some videos posted by Pii appear to show different variations of the Pink sauce, though she in a video likened the variety to lighting differences.

Other posts noted abnormalities with the nutrition label, which appeared to be affixed to the back of the plastic bottle with glitter glue. TikToker Anna Reports News, for example, noted there was milk listed in the ingredients, but no storage instructions. Others pointed out a misspelling of the word “vinegar.”

Pii on Wednesday posted a video on TikTok TikTok, saying it was time to “acknowledge the elephant in the room.”

Pii said errors with serving size would be corrected on future orders and were the result of an error in labeling (the nutrition facts on the Pink Sauce website have not been updated by Thursday). She did not address any of the comments about ingredients or storage. She said customers would also receive a gift and a thank you note and said her team was working on lowering the price of the sauce.

Pii, who did not return Insider’s request for comment, said she was following FDA standards, claiming the product was “currently in lab testing.” She said she was “so excited” to pitch the product to be sold in stores.

Ben Chapman, a food safety specialist and professor at North Carolina State University, told Insider he thought ordering and eating the Pink Sauce was “risky” based on what he had seen from videos featuring the sauce and its labeled contents. The ingredients listed in the sauce, including garlic and oil, might create a pH or water activity that make the product unsafe to ship without refrigeration, according to Chapman.

“Putting those two things together and leaving it at room temperature in other situations has led to botulism,” said Chapman, who has not tried or tested the product but has recently become aware of it going viral online.

Chapman pointed out that Pii has noted the product has not been “FDA approved,” but he called that claim “odd” because the FDA doesn’t approve such products. Instead, he said a product like the Pink Sauce would be subject to various federal and state regulations. On its website, the FDA notes it does not approve nutrition labels on food products.

“I don’t have a lot of confidence in the food safety aspect of what’s going on without knowing more about the product,” he added.

Tomatoes and the Candida Diet