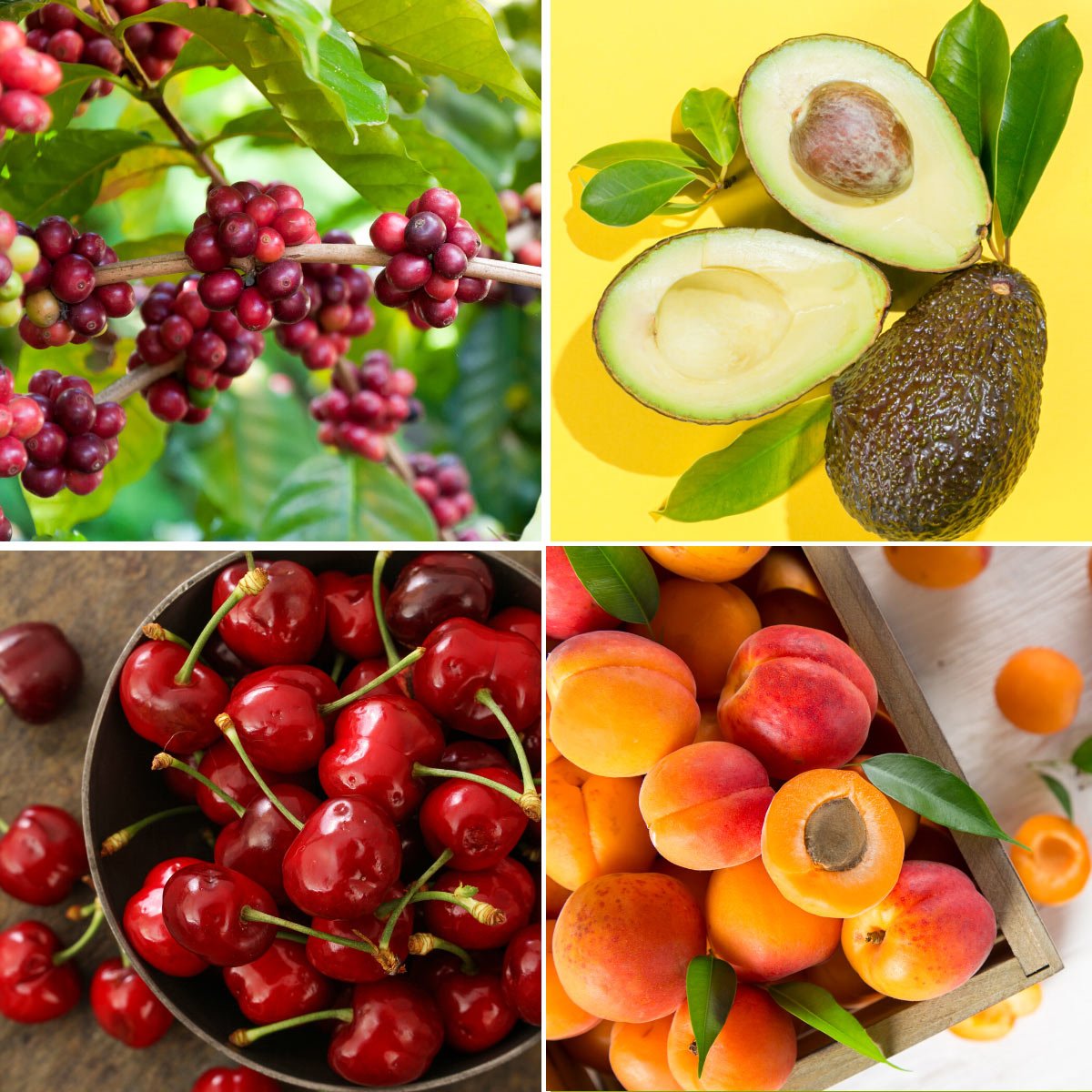 If you thought you could only count the number of fruits that start with A on one hand, I’m here to surprise you! I’ve found not 5, but 25 fruits just for you.

So get comfy and take a look at this list of fruits so you can get quiz ready in no time at all.

I’m excited to tell you all about the delicious fruits on my list. Most can be found in grocery stores, but some maybe not; there are a few different varieties. Some have a sweet taste, some are sour.

They can be found in tropical regions, and some just in your own garden.

You can do so much with fruit. You can eat it with ice cream, or in a fruit salad, make it into a jam or a juice, the possibilities go on and on!

It makes such a healthy snack as it is also often high in vitamin C (which supports the immune system).

So are you ready?

Let’s get into 25 fruits that start with A!

See how many of these nutritious fruits you recognize. If there are any that you think I’ve missed, let me know in the comments below!

Abiu fruit is from an Amazonian tree in South America. It has a bright yellow skin once ripe, and the flesh has a creamy texture. It is said to taste like custard! This is one tropical fruit I’d love to try.

The scientific name is Pouteria caimito.

The acai berry grows on the açaí palm tree. It is a small black-purple berry that looks similar to a grape and powdered acai berries are full of dietary fiber, vitamins, and minerals.

The scientific name is Euterpe oleracea.

Also known as the flowering almond, this shrub is found commonly in Afghanistan, Pakistan, India, Tajikistan, and Tibet.

It produces pink flowers and thin leaves which can be toxic.

The scientific name is Prunus jacquemontii.

This is a round/oval-shaped fruit that has yellow scale-like skin. You can eat both the flowers and leaves and the edible fruit has a pineapple flavor.

The roots can be used for medicinal purposes.

The scientific name is Annona senegalensis.

These fruits are valued for their nuts which are rich in protein. They are eaten by both humans and mammals like monkeys and elephants.

They are used to make jam, jelly, juice, and sometimes wine.

The scientific name is Irvingia gabonensis.

The fruit from this tree can be eaten but is usually seen as ornamental. If consumed it is made into a juice drink. The juice is said to stain.

The scientific name is Garcinia livingstonei.

This fruit is cultivated across the west of North America, including Alaska and parts of Russia. In years gone by, Native Americans would mash up the fruit and eat the sweet flesh as a dessert.

The scientific name is Cornus × unalaschkensis.

This shrub is native to the Appellation Mountains. The fruit is dark purple in color and is used to make jams and jellies.

The scientific name is Prunus alleghaniensis.

Now, this is an interesting entry as the almonds we may be familiar with are actually the seed found in a drupe (or stone fruit). The tree is native to Iran and its surrounding countries.

The seed is found in a hard corrugated shell similar to a peach stone. Almonds are a good source of energy.

An amanatsu is a hybrid citrus fruit from Japan. It is around the size of a grapefruit and can be eaten fresh or as juice or marmalade.

The scientific name is Citrus natsudaidai.

This tree is native to South American countries and the Amazon Basin. This fruit is similar to a common grape in appearance, but its skin is inedible and has to be peeled.

The flesh is sweet and is used to make jam. It doesn’t keep for long, as the plant is susceptible to fungal attacks.

This fruit is also called the June plum and is a native tree in the Caribbean. They look similar to mangoes in appearance and are used in stews, preserves, soups, and sauces.

The scientific name is Spondias dulcis.

The American black elderberry grows through the Rocky Mountains all the way down to Bolivia. The flowers, known commonly as elderflowers are used to make drinks.

The ripe fruit can be used to make wine, jelly, and dye. The roots, stems, and leaves are inedible and highly toxic – so watch out!

The scientific name is Sambucus canadensis.

The American persimmon, also known as a sugar plum can be eaten raw, cooked, or dried, and has several culinary uses. They can be fermented with hops to make beer or brandy.

The scientific name is Diospyros virginiana.

Sometimes, confused with the Canadian plum, this fruit is larger and yellow in color. It has both ornamental and culinary uses. Traditionally it was eaten by the Native Americans.

The scientific name is Prunus americana.

Apples are a favorite fruit of mine! Although I can’t say they keep the doctor away as the myth suggests.

They can be eaten raw, juiced, cooked into cakes and don’t forget apple pie.

The scientific name is Malus domestica.

This fruit is indigenous to the Australian outback. It looks like a kiwi fruit but it has a slightly more elongated shape. With a similar furry skin, it has been common bush food for both people and birds.

Make sure, however, that it’s ripe before consuming as the juice of unripe apple berries can cause bad heartburn.

The scientific name is Billardiera scandens.

Apricots are a small, soft-skinned stone fruit. With their sweet flavor they can be eaten raw, dried, or made into jam.

The largest producer of dried apricots is Turkiye, and it is the national fruit of Armenia.

The scientific name is Prunus armeniaca.

This fruit is similar to an apricot but similar in appearance to a tomato. They tend to be dark red in color and can have a sour taste depending on how ripe they are.

It is quite an aromatic fruit as it has high levels of hexyl acetate which is what gives apples their scent.

The scientific name is Prunus simonii.

Now, this is a fruit that I find fascinating. We all know about arabica coffee, but did you know that those coffee beans are actually the seed found inside the arabica fruit?

The fruit is cherry-like and red in color. It was first cultivated in Yemen.

The scientific name is Coffea arabica.

This fruit tree is native to the Amazon rainforest. It has a high acidity level and contains nitrogen and potassium.

It is best mixed with sugar than eaten alone. Exports to the UK and USA have only just begun.

The scientific name is Eugenia stipitata.

Asian pears are shaped like an apple but have mottled skin. They have a really soft flesh due to the high water content so they aren’t great for being baked into pies.

They tend to be eaten fresh, or made into sauces for marinating meat in countries like Japan and Korea.

The scientific name is Pyrus pyrifolia.

Well, this is an odd-looking one! It is a hybrid of a sugar apple and a cherimoya. It’s popular in Taiwan and is also found in Cuba, Lebanon, and Venezuela among others.

Despite its ugly appearance, it is sweet and juicy inside, with a vanilla flavoring that is also reminiscent of a piña colada.

A tree native to Australia, the seed pods of the baobab fruit are said to taste like sherbert.

Almost all parts of the tree can be used including for medicinal purposes.

The scientific name is Adansonia gregorii.

Although savory in taste, and used to make accompaniments like guacamole, avocados are actually a stone fruit.

Native to the Americas, avocados are high in healthy fats. They are also used in cosmetics and soap products.

The scientific name is Persea americana.

25 Fascinating Fruits That Start With A: #23 is weird!

A fun list of fruits that start with A to sink your teeth into. Discover these fruits today and get your vitamin C fix!

Did you enjoy learning about these different types of fruits that start with the letter A? There is some really tasty fruit in there. Whether common fruits or rare fruits I’m sure there is something that everyone would like to try.

I don’t know about you, but I love some fresh fruit for breakfast, its got such great health benefits.

If you loved this list of different fruit names beginning with A be sure to check out the list of vegetables, and food as well!

What is the Best Diet For Ramadan? – Personal Trainer Explains