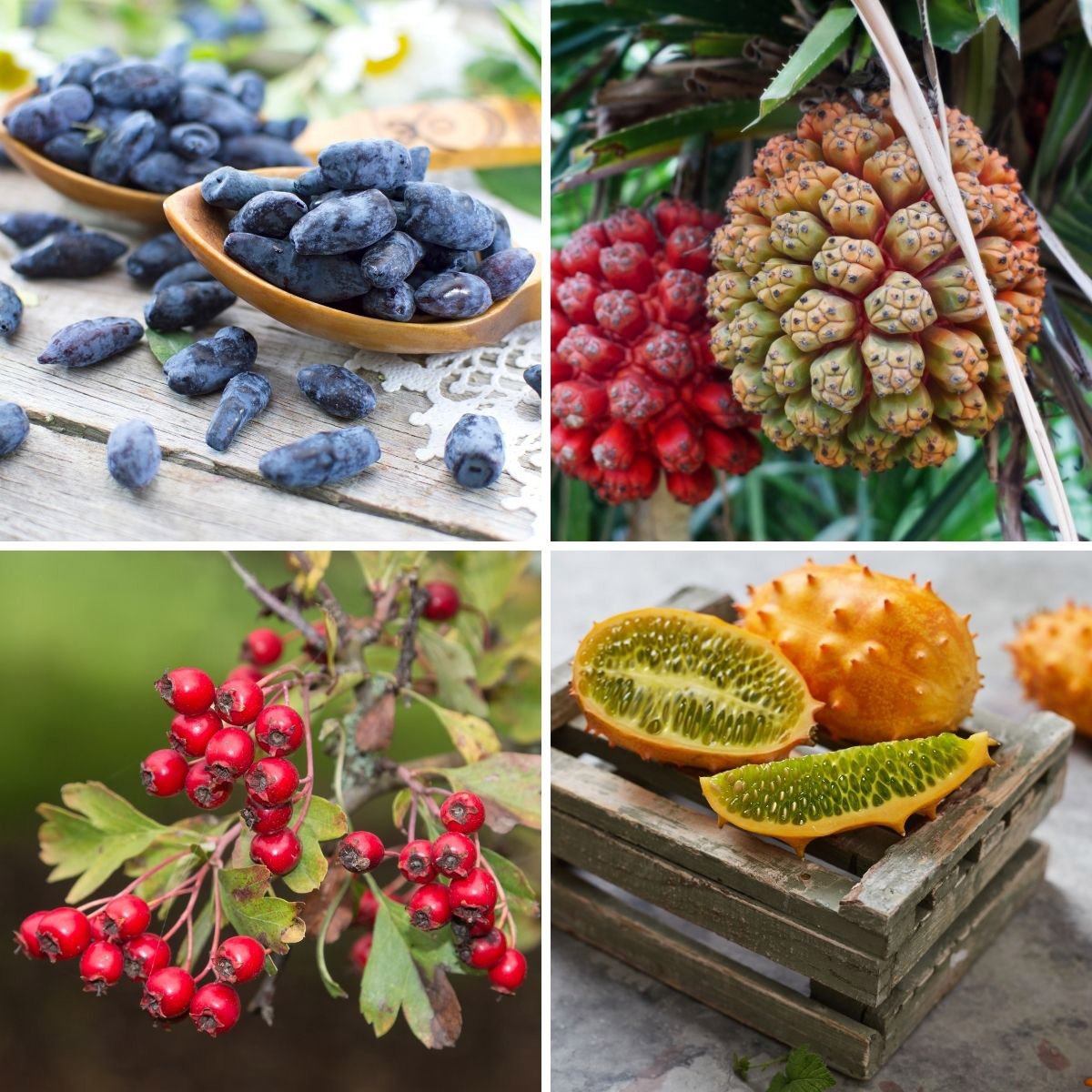 Naming some fruits that start with H shouldn’t be too difficult, right? If you think a little, you might remember honeydew melon or hazelnut (yes, hazelnut is a fruit!).

Or if you’ve ever read Mark Twain, the name Huckleberry may pop into your mind.

But after some research, I understood that I don’t know about 85% of culinary fruits that start with the letter H. How can I ever win any word games with such statistics?

So I’ve made this list of fruits to learn something new. Can you imagine that one of the fruits looks like an exploding planet and another like an alien fruit?

So let the fun begin and discover all these incredible fruits that start with H!

How many names sound familiar to you?

Hackberry, a large tree with pea-sized edible berries, is also known as common hackberry, sugarberry, nettletree, beaverwood, northern hackberry, and American hackberry. The berries are surprisingly high in calories and rich in protein, sugars and vitamins.

Hackberry fruit is one of the first known foods consumed by humans. Several species are native to North America.

The scientific name of the hackberry tree is Celtis occidentalis.

Hairless rambutan fruit tastes similar to the common rambutan but it doesn’t have any hair-like spikes. The fruits are mostly eaten fresh from the tree so you probably won’t find them in any local grocery stores.

This sizeable edible fruit is made up of numerous wedge-like long segments attached to a core. It has a tropical, sweet flavor and a floral aroma. But if you leave it too long to ripen, the fruit develops an unpleasant stench, that’s gained it the name ‘stink nut’.

The scientific name of the hala tree is Pandanus tectorius.

Hall crabapples are ornamental flowering trees, native to China, that produce miniature apples. These small fruits have a bitter taste when eaten raw but pack a flavour punch in baked goods. They’re also great for making jelly and jam.

The hardy kiwi fruit is similar to kiwifruit but the size of a berry or grape, smooth and often sweeter. It can have green, purple or brownish skin that doesn’t need to be peeled.
The scientific name of the plant is Actinidia arguta.

Haruka is a citrus fruit cultivated in Southern Japan. It has a mild, sweet taste and is rich in vitamin A and C. The species’ name is Citrus tamurana x natsudaidai.

This Japanese citrus hybrid is a good source of vitamin C, folic acid, potassium and fiber. It can be eaten as an orange but has a more bitter taste. Its scientific name is Citrus × hassaku.

The Hawaiian mountain apple, also known as Malay apple, rose apple, plumrose, pomerac or ohi’a ’ai in Hawaiian, is a beautiful fruit tree that bears bell-shaped apples with waxy red skin. They can be eaten like any other kind of apple. The scientific name of the species is Syzygium malaccense.

Hawaiian raspberry, also called ‘akala in Hawaiian, is mainly harvested in the wild. The berries are tart and juicy and much bigger than typical raspberries. The plant is botanically known as Rubus hawaiensis.

The scientific name of the hawthorn plant is Crataegus.

Hazelnuts are round nut fruits pointed at one end and surrounded by a hard shell. They make a great addition to many dishes and tasty snacks.

Hazelnuts are an excellent source of protein, dietary fiber, healthy fat, vitamin E and minerals. In particular, a 100g serving contains 60g of fat, 15g of protein and 10g of fiber.

The hazel tree is scientifically known as Corylus.

Highbush blueberry is the most common commercially grown species of blueberry in North America. You may also come across names like blue huckleberry, tall huckleberry, swamp huckleberry, high blueberry, and swamp blueberry. The berries can be eaten fresh or made into jam, jelly, pie, ice cream and more.

The scientific name of the species is Vaccinium corymbosum.

The name of this plant comes from its red drupe fruits that look like cranberries and have a similar flavour. They taste best cooked, for example, in preserves, jams, jellies and sauces.

This deciduous medium-sized tree produces red round cherries with an acid flavour. The cherries are edible but shouldn’t be consumed when the flavour is too bitter.

The Himalayan bird cherry is botanically known as Prunus cornuta. The fruit often gets infected by an insect and becomes horn-like, hence cornuta.

This species of mulberry produces an edible fruit forming a long cluster of several small drupes. Himalayan mulberries are purple or reddish-purple when ripe, fleshy and sweet. The scientific name of the species is Morus serrata.

The plum-like fruits of hog plum can be eaten fresh or made into juice, jellies and sherbets. They can also be used for their diuretic and febrifuge properties.

The drupe fruits have yellow-green skin and a sharp taste. Their flesh surrounds a large stone with many spines.

The fruit of the Hokkaido bird cherry is an ovoid drupe which is dark red or black when matured. It’s mostly cultivated in Japan and on Sakhalin. The species’ name is Prunus ssiori.

This fruit has a sweet taste but with little flesh surrounding the seed. Native Americans used to make an intoxicating drink from fermented cherries and apply ground seeds in cooking. The scientific name of the hollyleaf cherry is Prunus ilicifolia.

Did you know that the Honeycrisp was born in the 1990s, and it took several years of careful planning to develop it? This apple variety is a really valued creation for its well-balanced taste and crisp, juicy texture. It also stores very well in cool, dry conditions and can be enjoyed for at least seven months.

The scientific name of the Honeycrisp is Malus pumila.

The fruit of honey locust is edible. The fleshy part of the bean pods has a sweet honey-like taste and can be used in a variety of ways. The tree is scientifically known as Gleditsia triacanthos.

Honeyberry, also known as blue honeysuckle, sweetberry honeysuckle, or fly honeysuckle, tastes like a cross between a blueberry, blackberry and raspberry. It’s rich in vitamin C and phytochemicals and has been applied in traditional medicine in East Asian countries.

The scientific name of the plant is Lonicera caerulea.

Honeydew melon is a sweet fruit with pale green flesh and some surprising health benefits. It contains about 90% of water and is rich in vitamin C, potassium, and B vitamins. The name of the species is Cucumis melo.

Did you know that the horned melon was featured on Avengers and on Star Trek as an alien fruit? It sure looks like one. The fruit has horn-like spikes and jelly-like flesh. It has a peculiar taste, like a cross between banana, cucumber, zucchini and lime.

You can come across many other names like African horned cucumber, spiked melon, jelly melon, kiwano, or cuke-a-saurus. The botanical name is Cucumis metuliferus.

Also called wild goose plum, this wild species has shiny red or yellow plums with a sweet and pleasant taste. It grows in rich moist soils. The scientific name of the hortulan plum tree is Prunus hortulana.

Also named sour fig for its edible fruit, the plant has several culinary uses and medicinal properties. The fruits resemble figs and can be eaten fresh or made into jam. Hottentot fig is botanically classified as Carpobrotus edulis.

Huckleberries look like large dark blueberries and can be used to make different foods and drinks. It’s believed that Mark Twain had this fruit in mind when he named his famous character Huckleberry Finn.

One of the most common species of huckleberry is Gaylussacia baccata (the black huckleberry).

Huito, or jagua, can be used to make ice cream, jelly, jam, sherbet, syrups and drinks. It can also work as a cold remedy when brewed into tea. The unripe fruit provides a deep blue colour extract used as a natural source of dye.

In English, this exotic fruit is known as genipap and it goes by the scientific name Genipa americana.

Hydnora africana is a parasitic plant that has an unusual physical appearance similar to fungi. It produces an underground berry fruit with seeds that are surrounded by an edible fleshy pulp. It has a slightly sweet and starchy taste.

This Japanese citrus variety has a fragrant sweet-tart flavour. It contained vitamins A and C, antioxidants and beta-carotene. Hyuganatsu is botanically classified as Citrus tamurana.

Have a look at some fruits you better not put in your mouth!

This plant is grown for its attractive ornamental flowers and fruits. The fruits are slightly poisonous but the taste is anything but pleasant so you wouldn’t be tempted to eat it. The botanical name of the harlequin glorybower is Clerodendrum trichotomum.

Holly berries can be accidentally consumed because of their attractive bright red colour but they’re considered toxic to humans. The scientific name of the holly plant is Ilex aquifolium.

Honeyvine is a highly toxic plant. Its large pod-like fruits may be enticing to eat but should be avoided altogether. If you ever come in contact with the plant, wash your hands thoroughly!

How many fruits that start with H do you know? I bet horned melon would surprise you as much as hala fruit and huito!

Hope you found some interesting fruit names on this list! Which one would you fancy snacking on today?

I’ve also made an article dedicated to vegetables that start with H and foods starting with H. Check them out, if you’re interested! 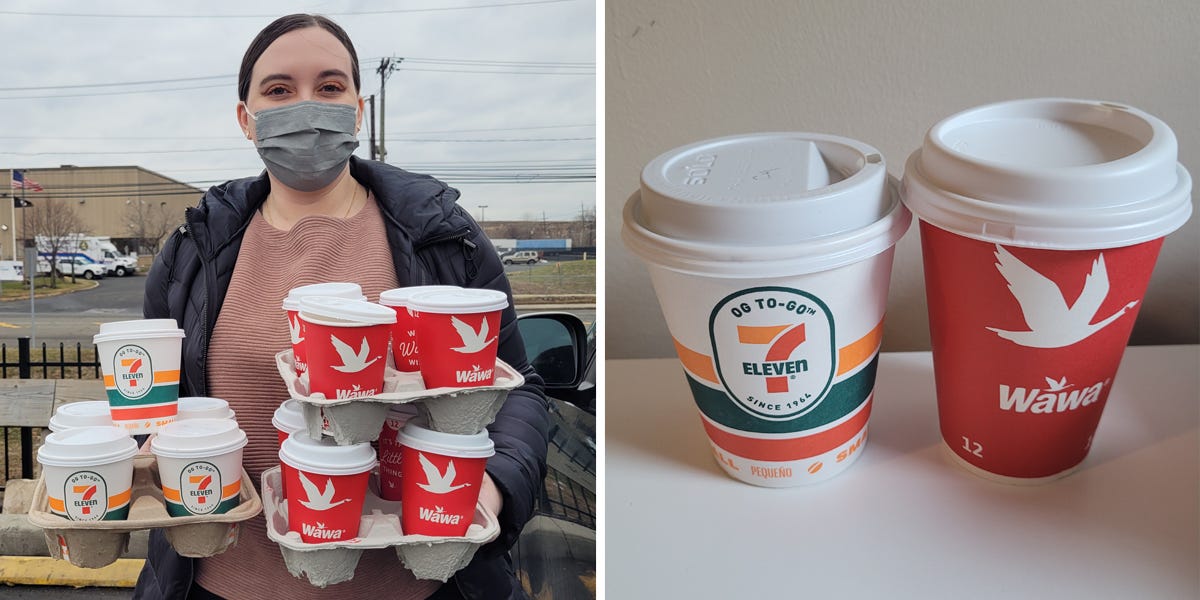 Wawa Vs 7-Eleven: Which Convenience Store Has the Best Coffee

Candida Diet and Corn – Is There Any Corn We Can Have As Candida Sufferers?