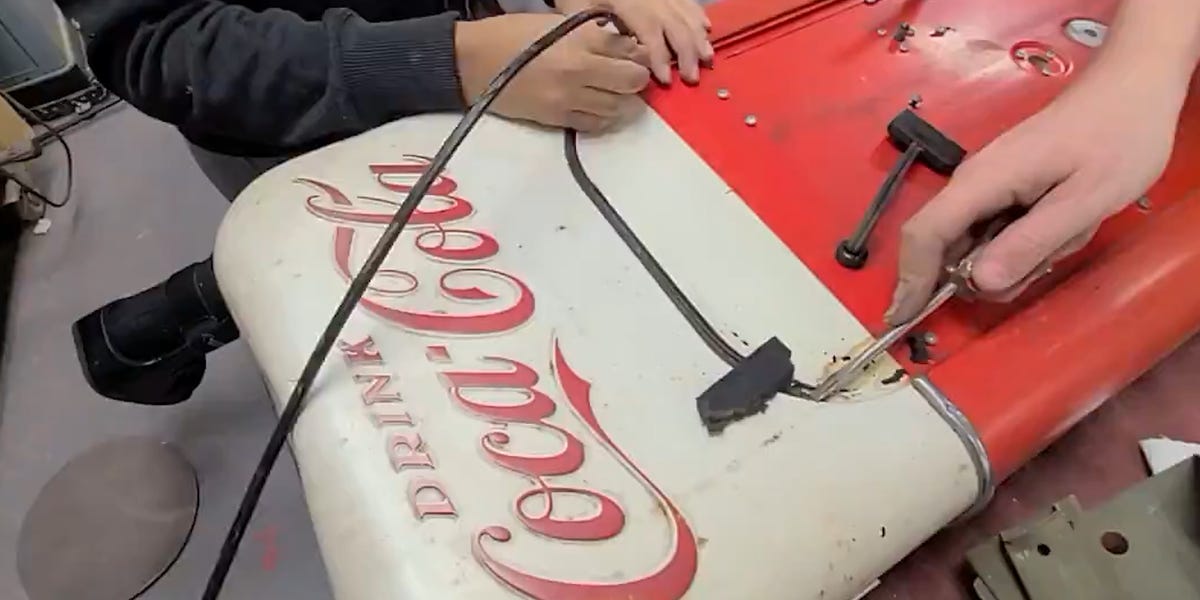 The following is a transcript of the video.

My name is Ray Hewitt from Soda City Restorations. My team, which includes my son and my wife, is going to walk you through the full restoration of this beautiful 1950s Vendo 44 machine. So, this is a Vendo 44 machine. Retail, restored, it’s between $7,000 and $8,000. And it was popular in the 1950s mostly.

We start by taking the machine apart. This allows us to restore one piece at a time from the ground up. Once the machine is disassembled, it is sandblasted and the bodywork is done. We sort the parts according to the way that they’ll be restored.

So all the parts that are going to be repainted, primed, and clear-coated are sent out for sandblasting, and then the rest of the parts are going to be restored by hand one part at a time. Technically it would be called abrasion blasting because we don’t use sand for it.

So it’s glass that’s been crushed into tiny pieces, and that’s run through a compressor, and the compressor blasts it out at high velocity, and it removes the paint, any dirt, any grime, the paint, and the primer that’s underneath the paint down to the bare metal so that we can begin to do bodywork on it and prepare it for priming.

So, we sandblast all of the outsides of the cabinet machine. Any places where we find any rust on the inside of the machine are blasted down to the bare metal so that all that rust can be removed and won’t be a problem in the future. It is important to note that when you’re sandblasting, you have to be aware and know what you’re doing, because if you sandblast the machine too hard you can actually cause waves in the sheet metal, and so it has to be done at the right pressure.

As we restored this machine, we found that some of the issues we faced were some large dents that were in the machine and some areas that had some rust, but those are pretty common when we’re doing restorations. Bodywork involves anything from filling and removing dents, like that big dent on this machine that was on the top of the door. For little dents or nicks, we use autobody filler to fill those and then sand those smooth so that it matches the exterior of the metal so they become unnoticed.

Not only was there a dent on the top, but there was also, along the bottom, but it also looked like it had been rammed with something in the corners. And so we had to spend a lot of time on this machine doing bodywork. Almost every machine that we do has some holes in it. Commonly, we have holes that we have to fix.

When there’s a hole that goes all the way through the metal, we often have to put a support on the inside of the frame, and then from the outside, we would fill the hole using a body filler or a long-hair body filler to secure the hole and make it strong enough to be able to look finished when it’s done.

When we restore a machine, we typically will put about three coats of primer on the machine, and sand between each coat to make sure that we’re getting a smooth finish. So, for the base coat, we use automotive paint. It’s not petroleum-based paint, like a Rust-Oleum paint that you would buy at a local home-goods store.

It’s an automotive paint that is fast-drying, and the clear coat can be applied over the top of it shortly after it’s painted without it causing any issues to the finish. We typically will put two to three coats of base coat on the machines, and for each base coat on this machine that we restored, the red part probably took about 15 to 20 minutes to do for each coat.

Then, after the red part is done, we will tape off all of the red areas, and then we’ll do the same with the white parts, so the white top of the machine. The painting is done with a compressor and an automotive spray gun that holds about 20 ounces of paint. After the clear coat is applied, we will typically address anything that might be wrong in the finish of the clear coat.

If the finish that comes out of the gun is not as perfect as we want it to be, then we always have the option of running over the entire machine with 1,000-grit sandpaper and polishing the clear coat to a new finish. Once the machine is painted and clear-coated, the reassembly process begins, including a brand-new cooling system and resembling each part back into the machine in working order.

On this machine, we noticed that the power cord had been cut somewhere along the line on the machine. And when we see that, that’s usually an indication that somebody didn’t want it plugged in because it wasn’t safe. And we did notice that a lot of the wires had been frayed. Perhaps they had been chewed by rats along the way. That’s very, very common.

Sometimes we can get them out without damaging them, but we put new ones in just for cosmetic reasons. It makes it look much newer. The cooling systems in these machines are 70 years old, and oftentimes we find that the compressors have locked up, that rats have chewed through the wires, the fans don’t work, the thermostats are stuck, or that there are leaks in the old copper tubing.

And so this is why we always will replace the old cooling systems. In addition to that, they use an old refrigerant that is very expensive and hard to get now. And so the best thing to do is to just replace the compressor and condenser on the machine. When we reassemble the machine, we want to make sure that every part is working as it was originally intended to.

Sometimes that requires for the coin mechanism a cleaning or disassembly of the coin mechanism to address whatever may not be functioning properly. On the machine, there are several pieces that we send out and get re-chrome-plated. So the main bezel that’s on the coin door where you insert the coin, and the crank handle are all replated.

When we restored this machine, we replaced all of those with new lettering. And then in addition we added, just for a little bit of show, another additional 10-cent decal on the outside. There’s a sense of satisfaction with every machine. But my favorite part is always the same, is when everything’s put together, everything’s been tested, the cooling system is in and running, and you put a dime in it for the first time and the can falls out and you grab that can and it’s ice cold and you crack it open.

It’s just very satisfying. Most people that come to us have a machine that has been in their family for 20, 50, or 75 years, and it was their old grandfathers, they dig it out of the barn, and they want to bring it back and make it as an heirloom piece that they’ll pass on for generations for the future. 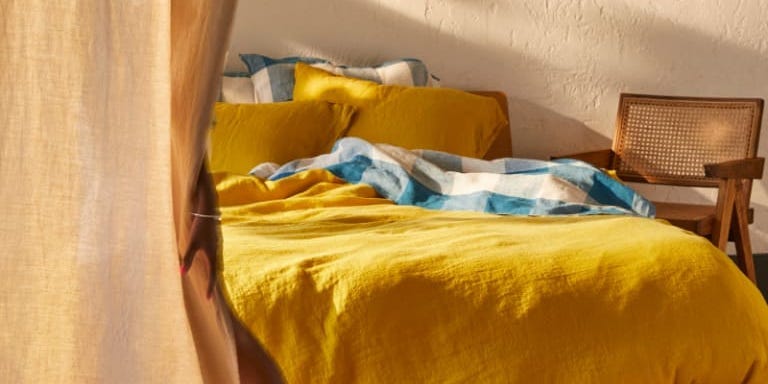 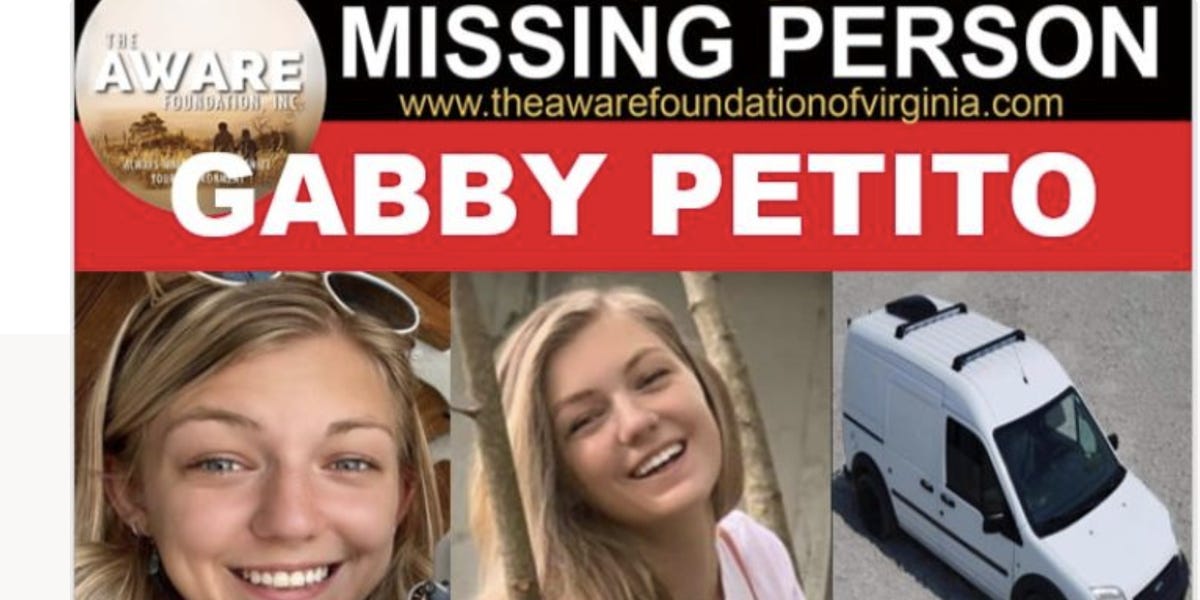 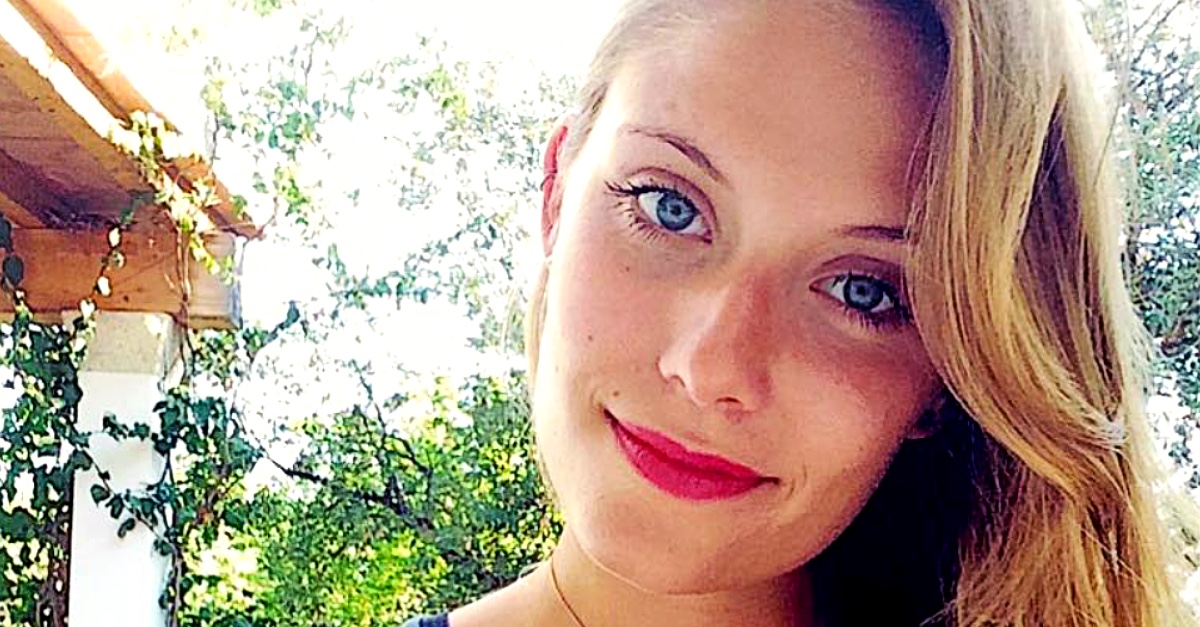