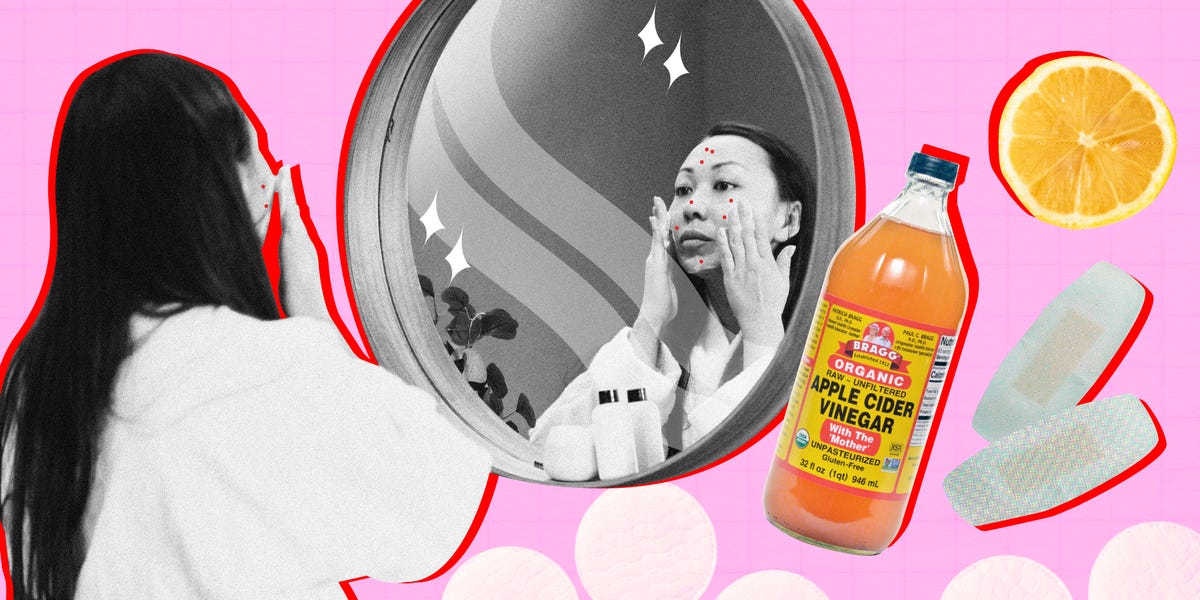 Sandy Singh first started experiencing cystic acne at 14. Over the course of the next decade, she battled the painful red pustules, which covered her cheeks and chin. She recalls avoiding dates, university classes, and most social situations because she was so embarrassed.

“When I saw myself in the mirror, I cried,” she said. “I wanted it all gone.”

But to her doctor, Singh said, she was just another of the hundreds of teenage girls passing through his doors. He refused to prescribe anything stronger than the over-the-counter Proactiv skin system, promising that her teenage pimples would “soon pass.”

When a classmate called Singh “pepperoni pizza face,” it was the last straw. She took her treatment into her own hands, cutting dairy from her diet and experimenting with aloe vera for the pain and scarring. The method that she said finally cleared up her skin: drinking daily shots of apple-cider vinegar.

Now 27, Singh has accumulated over 240,000 TikTok followers by sharing her personal journey with cystic acne. She regularly advocates for apple-cider vinegar and continues to use it as a toner.

That’s despite the fact that there’s no evidence apple-cider vinegar works to combat acne, according to Dr. Ophelia K. Veraitch, a London-based dermatologist. Veraitch describes the use of ACV as “social-media rubbish which could actually irritate the skin and aggravate the acne.” Even when only ingested, the vinegar can cause nausea and loss of appetite.

Singh said she knows her ACV regime isn’t recommended by dermatologists. But as long as it works for her, she doesn’t care.

“Yeah, I had a loss of appetite,” said Singh, who lost weight when she started drinking the vinegar. “But I was way happier that my face was clearing up.”

Living with cystic acne can be painful, mentally and physically

Painful, usually large, and deep within the skin, cystic acne is the most severe type of acne, according to the Cleveland Clinic. It can be incredibly difficult to treat.

It’s also more likely to affect women past their teen years, according to a 2007 study led by the University of Alabama. That’s due to hormonal conditions exclusive to people with female reproductive organs, such as polycystic ovarian syndrome, which the Centers for Disease Control says affects somewhere between 6 and 12% of American women.

and by applying prescribed topical gels to the skin. But these treatments don’t work for everybody, and the last line of defense — the prescription drug Accutane — can have a slew of unpleasant side effects, from hair loss to nosebleeds to serious birth defects that require women who take the drug to avoid pregnancy. And for women who are uninsured or otherwise can’t afford treatment, prescription medications are off the table.

Failing to treat acne can have serious mental-health consequences. A 2018 study in the British Journal of Dermatology, based on a quarter-century of medical records from a UK primary-care system, found that patients diagnosed with acne were 63% more likely than those without it to develop

in the year after their diagnosis.

Acne struggles have spawned a slew of frustrated social-media communities, from the 420,000-member r/acne subreddit to TikTok’s #acnecures, which has more than 8 million views. There, you’ll find women advocating for soaking the skin in everything from liquid chlorophyll to home cleaning products — none of which are approved by dermatologists, and some of which can seriously damage skin.

Women who’ve tried these techniques say they’re well aware they’re not recommended by doctors. But after years of tender skin, ineffective medications, and worsening mental health, they’re fed up with the establishment.

Throughout her teens, Trena Reeves suffered from cystic acne. But she couldn’t afford basic healthcare, let alone a dermatologist, and the acne followed her into adulthood.

“It’s like I’m not put together enough to take care of myself,” Reeves, a 21-year-old caregiver, said. “I put so much effort and time into my appearance, read books on skin care, watch the tutorials, do the diets, use the products.”

Reeves’ embarrassment about her acne caused anxiety, which led to skin picking, which led to more acne. She said she felt hopeless and desperate.

Then she saw a TikTok video in which a woman with severe cystic acne put hydrocolloid bandages on her face. The bandages are typically used to treat open wounds, which makes them useful for absorbing the fluid and pus from pimples. Some brands have adapted them into smaller “spot stickers” that can be placed over a single zit, keeping acne sufferers from touching their pimples with germ-covered hands.

In a TikTok video, Reeves showed herself trying out the bandages. “I can’t afford a dermatologist, and I can’t get my acne to go away,” she wrote. “Guess I gotta take care of things myself.”

The video went viral, drawing hundreds of comments from fellow acne sufferers. Reeves has now become something of an influencer in the hydrocolloid-bandage space, reviewing products she receives from different brands for her followers.

Reeves said she’s cautious to avoid trapped bacteria when using the stickers, making sure her hands, tools, and surfaces are clean. “They help me by preventing me from picking at my own face,” she said.

But even with good hygiene practices, spot stickers can cause scarring and damage, Veraitch said. “Acne is caused by occlusion, which causes inflammation of the pilosebaceous unit in the skin. By putting an adhesive over spots, it is further occluding them, leading to an increase in acne bacteria, cysts, and bad scarring. I can tell by looking when a patient has been using these spot pads — the scarring gets particularly bad.”

Dermatologists’ disdain hasn’t deterred the bandage trend from spreading. The #hydrocolloid hashtag has more than 200 million TikTok views. “Riverdale” actress Lili Reinhart, who’s been open about her struggles with cystic acne, has shared photos of herself wearing the bandages with her 29 million Instagram followers.

“There are many ‘skin influencers’ who are not qualified to be giving the advice that they give,” Veraitch said. “This is now one of the biggest challenges for dermatologists.”

Ella Rechner, 22, struggled with her skin — and the indifference of her dermatologists — for years. She’s tried spironolactone, clindamycin,

pills, and all of the popular over-the-counter skin-care lines for acne, including Proactiv, Curology, and Rodan & Fields.

Rechner, a content-marketing specialist in Michigan, said dermatologists shrugged off her concerns. “‘It’s not that bad, and it could be much worse,'” she said one told her.

When her acne was at its worst, Rechner spent up to two hours a day Googling potential cures. She said COVID-19 mask requirements came as a relief, because she could hide as much of her face as possible.

Desperate for a solution, Rechner started using treatments she found online, including Vicks VapoRub and toothpaste at bedtime as a spot treatment, and lemon juice and sugar as an exfoliant. They burned and irritated her skin and didn’t improve her acne.

“Using a cleanser that’s meant for teeth can disrupt the pH balance of your skin and irritate it greatly,” Dr. Rachel Nazarian, a dermatologist at Schweiger Dermatology Group in New York City, told Byrdie. And VapoRub has a base of petroleum jelly, which can clog pores.

Cystic acne is especially hard on women of color, who struggle to access culturally specific treatment

Nani Acevedo struggled with cystic acne during her teens. But being raised by a struggling single mom in a small Mexican town with no dermatologists, her only option was the Asepxia acne soap bars recommended by her local pharmacist.

“I never went out seeking medical help,” she said. “I just didn’t think at the time that my mother wanted to spend the little money we had on acne medication.”

After trying several home remedies, Acevedo settled on her holy grail: Zote soap and brown sugar as an exfoliant. Veraitch said the latter isn’t something she’d recommend: “We don’t recommend using any physical exfoliants on acne, because it can cause trauma to the skin and create scarring and pigmentation.” (As an alternative, she suggested a chemical exfoliant like salicylic acid.)

According to a 2010 study led by the European Academy of Dermatology and Venereology, Black and Latina women are more likely to have clinical acne than white and Asian women, and significantly more likely to have hyperpigmentation and scarring. Dermatologists often don’t account for these cultural differences in treatment, some women of color say. Singh, who is West Indian, said her dermatologist failed to understand her unique skin tone.

“We get so many inquiries from places halfway across the world from people saying that they don’t have any professionals close to them that they trust and have found their way around Black skin, or darker skin tones,” Dija Ayodele, a London-based aesthetician and skin-care expert, told PopSugar last year.

In 2018, Ayodele founded the Black Skin Directory, which aims to connect Black people with medical professionals who understand their unique skin. She recently spun off the site into a book, “Black Skin,” which explores treatment options for a number of skin conditions, including cystic acne.

Seemingly every week, a new acne trend hits TikTok. These days, the app is full of videos praising the wonders of spearmint tea, hemorrhoid wipes, and snail mucin.

Veraitch said she understands the appeal of a home remedy, especially for those who can’t access a dermatologist for affordability reasons. And she’s sensitive to the fact that not all doctors recognize acne’s mental-health impacts.

“For a lot of people, I think that they feel misunderstood, because of the extent of the impact that this condition can actually have on their lives, both physically and mentally,” she said.

If you’re feeling dismissed by your dermatologist, Veraitch said, don’t be afraid to push back. Make it clear that your acne has mental-health consequences. A good dermatologist “will want to know,” she said, “and this information might affect the treatment plan they suggest.”

If that fails, seek a second opinion from a dermatologist with proven qualifications. In the UK, Veraitch recommends the General Medical Council’s specialist register; in the US, the American Academy of Dermatology’s website lists board-certified doctors. The AAD also offers a page with suggestions on how to get treated if you don’t have insurance. 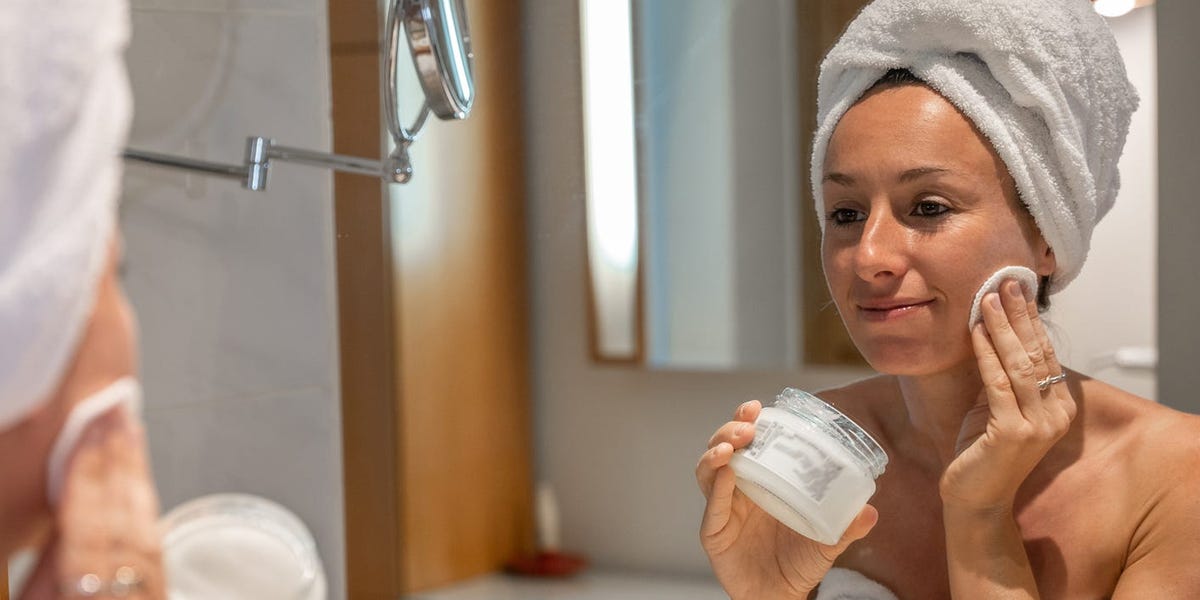 The Best Face Masks for All Skin Types

Use These Best Foundation Brushes to Apply and Blend Your Makeup