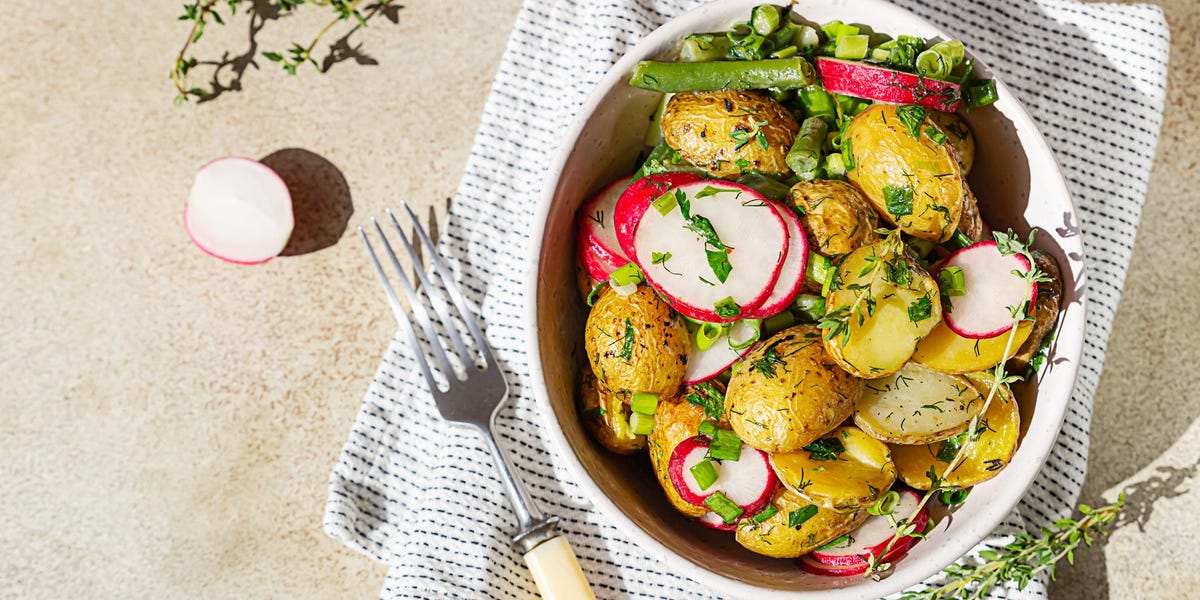 Potato salad is a cookout classic for excellent reason. It’s a creamy, tangy, and flavorful side dish that brings a refreshing balance to a grilled feast. While potato salad isn’t a complicated dish to make, it does rely on choosing the right potatoes to provide the perfect texture and flavor.

To help you find the ideal potatoes and to properly cook them for potato salad, we’re bringing you this potato salad guide filled with expert advice.

When deciding which potatoes to use for potato salad, it’s important to remember that different potato varieties have different textures, and the “best” one for salad really depends on your personal preferences.

Mayo-based Southern potato salad is well-known for a softer texture, and starchier potatoes achieve that. “The insides of these potatoes keep their form really well and mix nicely with other ingredients,” Barrett says.

Lead chef for online culinary arts and food operations Shawn Matijevich of the Institute of Culinary Education noted that most prepared potato salads in grocery stores and delis use starchy potatoes, so if that’s the type of potato salad you’re craving, then these are the potatoes to buy.

“In between” potatoes, which have more moisture than starchy potatoes but less than waxy potatoes, are an excellent middle ground for either mayo-based or vinegar-based potato salad. If you’re not sure whether you want waxy or starchy potatoes or which type of potato salad to make when you go shopping, go for an in-between potato.

The best potatoes to buy for each texture

It’s very difficult to tell the difference between a “starchy” potato and a “waxy” potato when you’re browsing at the grocery store or farmer’s market. That’s why we’re breaking down these categories for you:

Quick tip: It’s easy to buy more potatoes than you need for a potato salad, but these potato storage tips will help you repurpose those flavorful spuds whenever you’re ready.

The best way to cook your potatoes for potato salad

Depending on the style of potato salad you want to make, you can choose to either roast or boil your potatoes.

The potato-cooking process for potato salad varies depending on which type of salad you’re hoping to make.

“Boiling is the most traditional and works best for potatoes destined for a classic, mayonnaise-based dressing. Roasting potatoes for potato salad brings out deeper flavors, especially if the skins are left on. And roasted potatoes are wonderful when served warm with a vinegar or mustard-based dressing and fresh herbs,” says Bailey.

How to boil potatoes for potato salad

1. Wash and cut the potatoes. Rinse your potatoes under cold water to scrub off any dirt and peel the potatoes if desired. Then, cut small potatoes in half and larger potatoes into quarters. “Aim for one-to-two-inch pieces that are all about the same size. If they look the same, they’ll cook the same,” Bailey explains.

3. Test the potatoes. Cook the potatoes until a fork slides into the potato, but they still have their texture and aren’t mushy. After about 5 minutes of cooking, check one potato for doneness by removing it from the boiling water and checking with the fork. If the sample potato still isn’t tender, continue boiling. Remove and taste one every minute or so until you reach the desired tenderness, says Bailey.

4. Drain the potatoes. Once the potatoes reach your preferred texture, drain them in a colander. Let the potatoes cool slightly, then mix them with dressing and other potato salad accoutrements.

How to roast potatoes for potato salad

2. Season the potatoes. Toss the potatoes in a high heat oil of your choice, like olive or avocado, and season them well with salt and any other herbs or spices desired, Bailey says. Be sure they’re evenly coated.

3. Roast the potatoes. Spread the potatoes on one or more baking sheets, making sure they have plenty of room and don’t overlap. Roast the potatoes until they are tender, about 30 to 45 minutes, flipping once or twice along the way, Bailey says. Allow them to cool slightly before mixing with dressing and other ingredients.

Quick tip: Whether you’re making a mayo-based salad or a vinegar-based salad, Barrett recommends letting the potatoes cool just long enough so that you can handle them. Dress your salad with warm or almost room temperature potatoes, but not cold, as the residual heat helps the potatoes absorb more flavor from the dressing.

Picking the right potatoes will make the difference between a so-so potato salad and a memorable one. If you’re using a mayo-based dressing, go with a starchier potato for maximum flavor quality. For a vinegar-based salad, pick waxier potatoes that can uphold their texture even as the acidic dressing works its way into the taters. 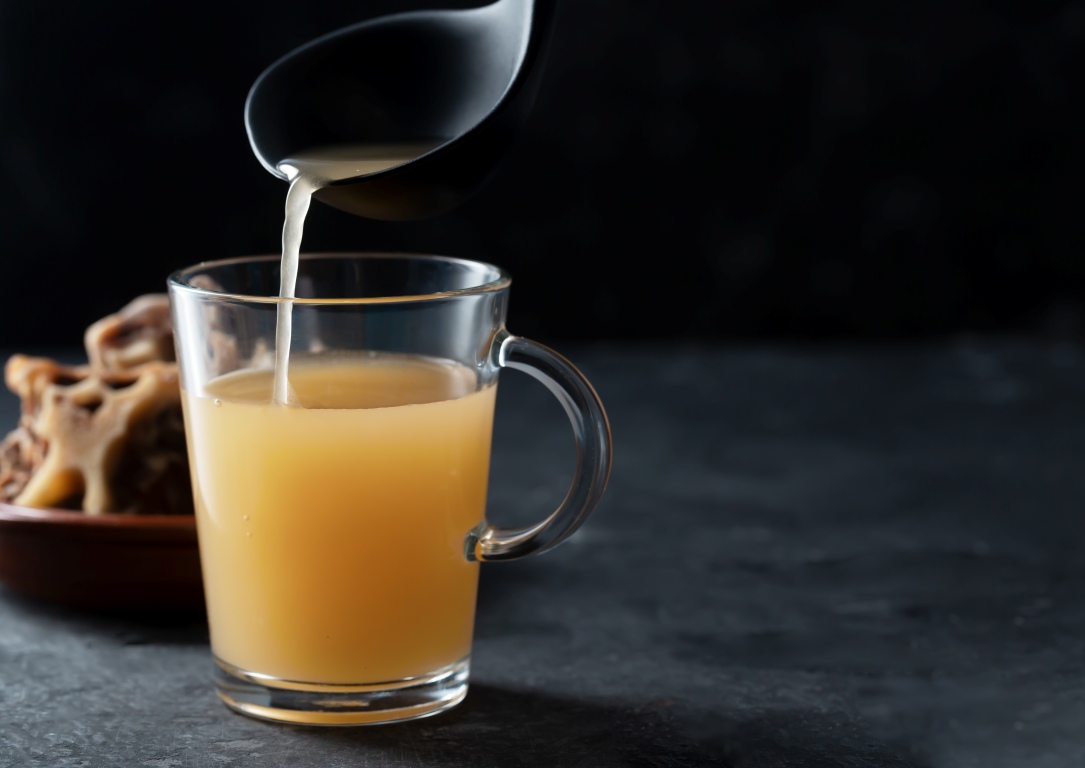 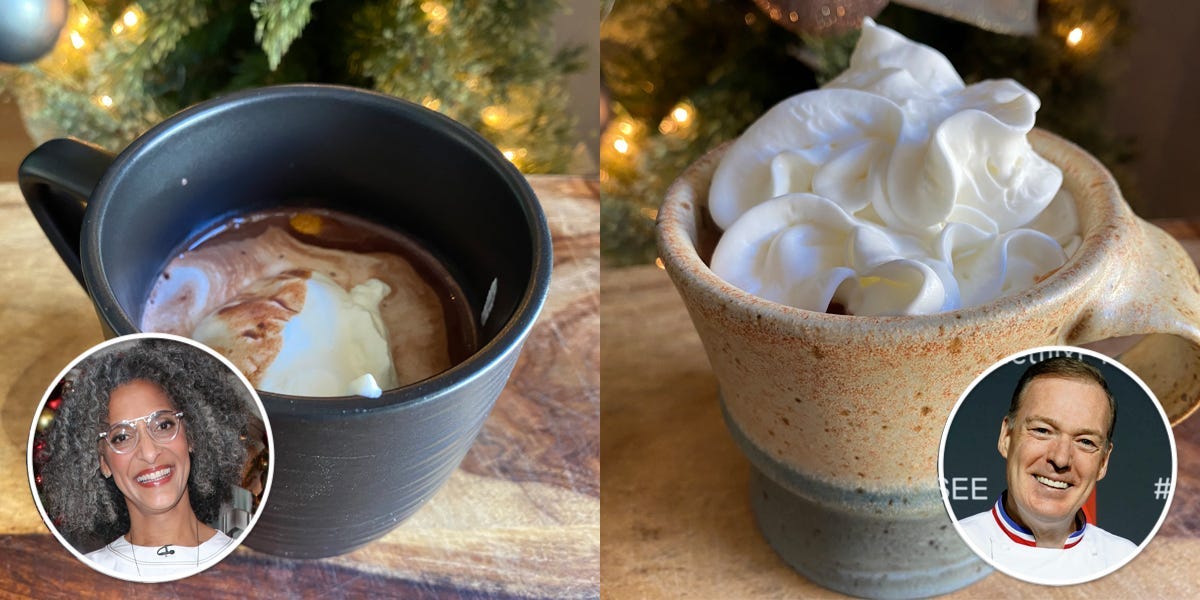