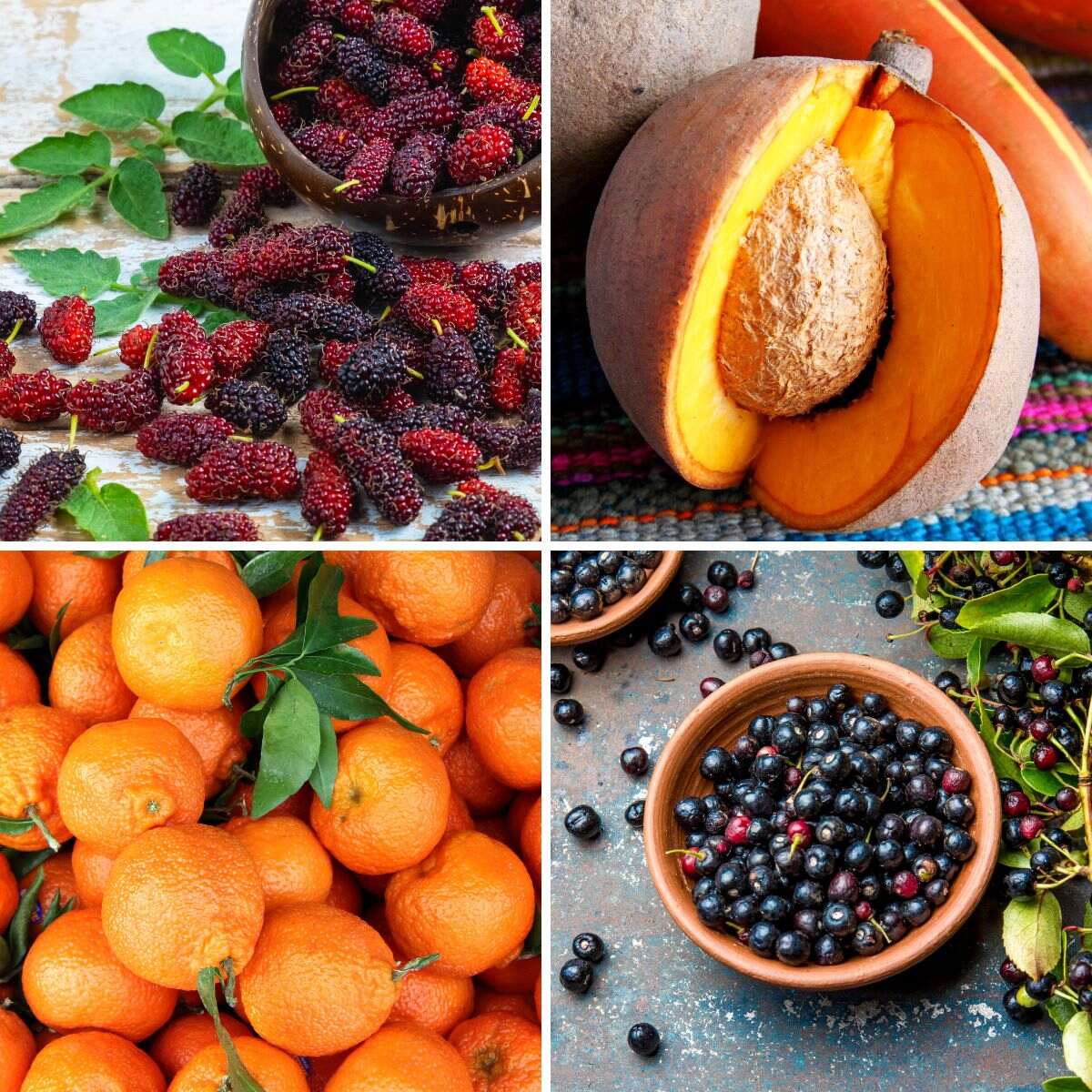 How many fruits that start with M can you name off the top of your head? Perhaps you’re thinking of a mango? Or mulberries? Are you starting to get stuck yet?

I thought so, that’s why I’ve created a list of 25 fruits that start with M to help you out. From the mamey sapote to the marula, you’ll be an expert in fruits beginning with M by the end of this post.

So, how did I decide which fruits get included here? I chose culinary fruits, which means that although they may not scientifically be considered fruits, the fruits here are all treated as fruits in cuisines and cultures around the world.

A fruit is scientifically defined as the mature, ripened ovary of a plant, which actually excludes a lot of foods that are treated as fruit in cooking for their sweet flavour, but are technically vegetables or nuts.

But I don’t want to get bogged down in the details here, so just know that everything included on this list is a sweet, culinary fruit that begins with M.

This fruit is a type of rose-apple, so called for the fragrance that the ripe fruit gives off. Similar to guava fruit, but with fewer and bigger seeds, these fruits share the same jelly-like texture, juicy flesh and thin skin, Its scientific name is Syzygium jambos.

This apple is also known as Malay apple fruit, mountain apple, rose apple, Otaheite apple, pink satin-ash and is native to tropical Asia and Australia. It can be eaten raw or cooked and in Puerto Rico it is used to make wine, while in Guyana, its skin is boiled down to make a syrup. Its scientific name is Syzygium malaccense.

Malus sieversii is the scientific name for a wild apple which is native to the mountains of Central Asia and is actually considered to be the primary ancestor of most domesticated apples! They’re now endangered.

Scientifically known as Pouteria sapota, the mamey sapote fruit can be eaten raw but is usually made into foods such as milkshakes and ice-creams. It is eaten in many countries throughout Latin America.

This fruit looks very similar to the Mamey Sapote but is actually totally unrelated. The fruit is not widely eaten outside of the Bahamas, the Caribbean and the French West Indies, but it has varied uses there: mixed with rum or coconut oil, its seeds are used to treat headlice and bed bugs, while the flesh of the fruit can be eaten in a fruit salad, jams or liquor. Its scientific name is Mammea americana.

This fruit is a variety of the Siberian apricot and is very resistant to cold, meaning it grows well in northeast China, Korea and Manchuria. Its scientific name is Prunus mandshurica but it is also called Manchurian apricot and scout apricot.

Scientifically known as Prunus maackii, this cherry is native to Korea, Southeastern Russia, and, you guessed it, Manchuria. The fruit is often used for juice, jelly and jam.

This apple is found in China, far eastern Russia, North Korea, and Japan, and some people consider it to be a variety of the Siberian crab apple, rather than a distinct fruit in itself. Its scientific name is Malus mandshurica.

Mandarin oranges are a small type of citrus fruit, which are easy to peel and are enjoyed all around the world for their citrus, sweet taste and vitamin C levels among other health benefits. China and Spain are the two countries in the world that grow the most mandarin fruits, whose scientific name is Citrus reticulata.

Did you know there are over 500 different varieties of mango in India alone? There are two distinct genetic populations in mangoes today – the Indian type and the Southeast Asian type. Its binomial name is Mangifera indica.

While Manilkara elata is its scientific name, this fruit is more commonly known as cow fruit. It looks like an apple and has a milky texture and is often sold by street vendors in the Brazilian state of Para in South America, while some indigenous people in the Amazon drink the milk from its pores.

This berry is native to Chile and adjacent regions of Southern Argentina, where they are harvested from the wild every year. The trees are not cultivated on a commercial scale but are sometimes cultivated in gardens for the small, tasty berries. This small fruit is also known as the Chilean Wineberry while its scientific name is Aristotelia chilensis.

The marula fruit, known scientifically as Sclerocarya birrea, is a socioeconomically significant fruit in many African countries in East and West Africa, where it is fermented and sold as an alcoholic beverage. Its oil is consumed, used to moisturise the skin and to make cosmetics.

This passion fruit has a slightly tart, sweet flesh,  similar to an apricot, thus earning it another name: the wild apricot. The maypop fruit grows on a perennial passion flower vine, which produces striking purple flowers as well as the delicious fruit. Its scientific name is the Passiflora incarnata, but I think maypop is one of the best fruit names I’ve encountered!

This edible fruit has been cultivated since Roman times, and has acquired the rather cheeky common name of ‘monkey’s bottom’ in some parts of England. The fruits are hard and acidic when ripe so must be bletted (over-ripened) before they can be consumed. Its scientific name is Mespilus germanica.

This type of plum is found in Central America and is widely cultivated and used for jams and preserves. The fruit ripens in late autumn/fall, is found in regions of Mexico and North America and its scientific name is Prunus mexicana.

This fruit grows on the moriche palm in Brazil, Columbia, Ecuador and Peru and prefers tropical climates. They are often used to make juice, jams and ice cream, as well as fermented to make wine. The scientific name of this tropical fruit is Mauritia flexuosa.

These fruits are red, pear-shaped and darken to almost purple when ripe. They can be eaten raw or cooked and are also known as mountain shadbush and Bartram’s serviceberry. Its scientific name is Amelanchier bartramiana.

This berry is native to Australia and is enjoyed as a bush-food for its sweet and gingery flavour. The berries are plump and white, and its scientific name is Austromyrtus dulcis.

The rather more catchy common name for Synsepalum dulcificum refers to the ability of this berry, when eaten, to make any subsequently consumed sour food taste sweet.

The berry is relatively low in sugar itself but contains miraculin, which is a taste modifying compound, whose molecules bind to the taste buds masking the sour taste in any subsequently consumed food!

This cherry is native to northeastern Asia and Eurasia, and its scientific name is Prunus maximowiczii. As well as edible cherries, the tree is useful in many ways, for wood and for dyes produced from the bark and leaves.

Musa Ingens is the scientific name for the Great Highland Banana, which is the biggest banana, growing on the biggest fruit tree in the world! This enormous banana grows in Papua New Guinea and countries in Southeast Asia, like Indonesia,  and tastes like sweet banana with a dash of citrus – delicious!

There are 64 different species of mulberries which turn from pink to red during the ripening process, and the ripe fruits have a pleasant, sweet flavor. The M. alba species is preferred by the silkworm, while the scientific name for the genus is Morus.

Also known as Prunus murrayana, scientifically, the shrub that grows this fruit native to Texas, in the United States and is critically endangered. The sweet fruit is red with white dots and a waxy skin. Apparently, it is so rare that nobody has seen Murray’s plum fruit since it was first scientifically described. Since there are no images of this fruit and you can’t exactly pick it up at the grocery store, this is one for the imagination!

Musk Melon refers to the collective group of sweet melons, whose binomial name is Cucumis melo. The fruit is a pepo, which means it is actually a berry with a fleshy centre without a stone – kinda makes sense, right?

Now you’re equipped with 25 fruits that start with the letter M. Let me know in the comments what you think I missed and I’ll be sure to add it next time I update this list!

Mango and mulberries as far as you got with your list of fruits that start with M? Here’s 25 fruits to change things up!