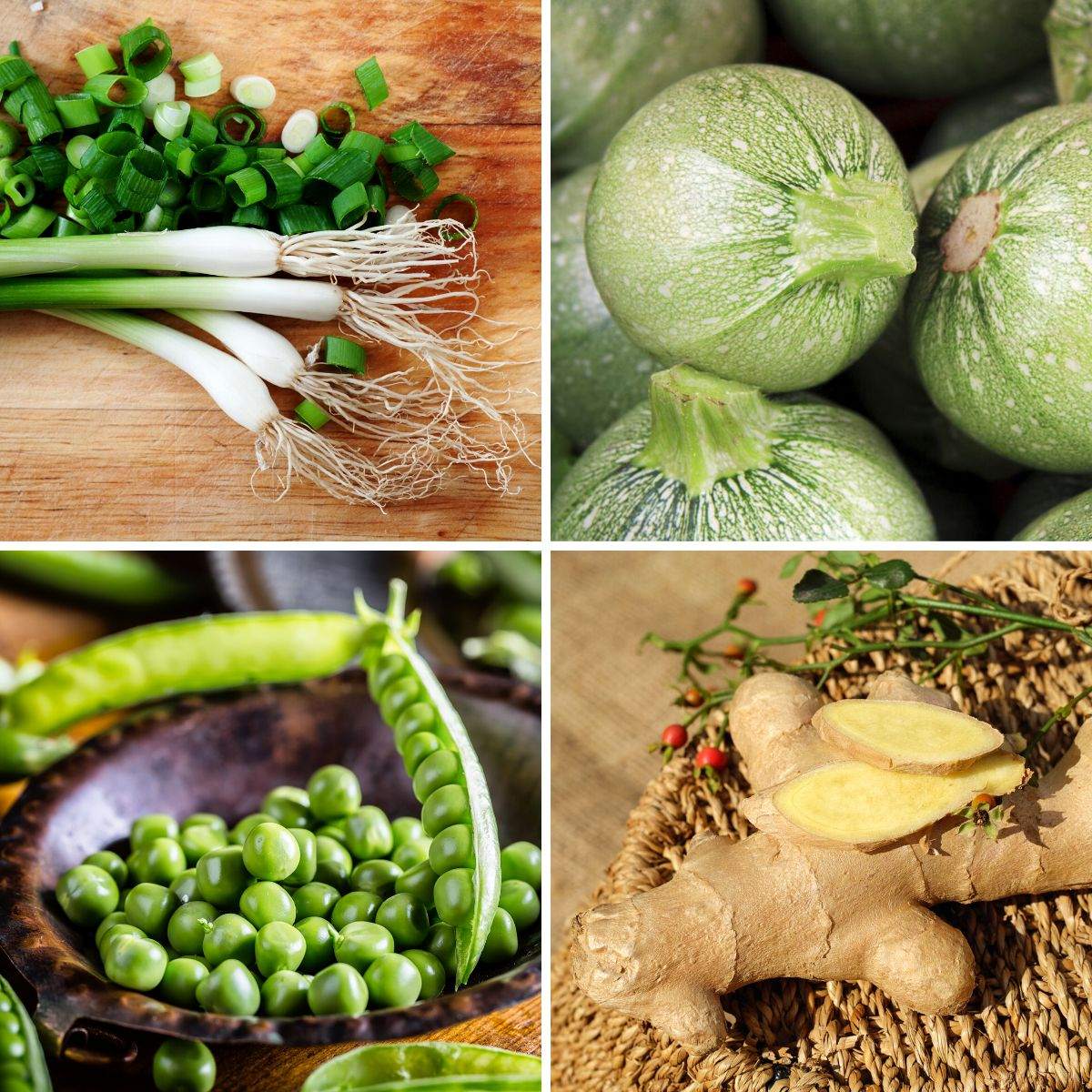 But first, I think we need to establish what counts as a vegetable, before we get into the vegetables that begin with the letter g.

There are actually a few different ways to categorise vegetables: botanical vegetables and culinary vegetables are the most important ones.

Scientists use botanical categorisation to distinguish between fruits, vegetables and other plants.

Fruits are the edible seed-bearing ovary of the plant, whereas vegetables are any other plant part that is edible (root, leaves, stems). This is why things we might consider vegetables, like tomatoes and aubergines, actually come under the botanical category of fruit.

Culinary categories are more what we associate with fruit and veg. They relate to whether a plant is used primarily for sweet or savory dishes. Hence why tomatoes and aubergines are both culinary vegetables, even though they are botanical fruits!

We are basing this list on the culinary categorisation of vegetables!

You should also check out our list of fruits that start with g.

Galangal is a root native to Southeast Asia. It is used in a lot of Chinese, Indian, Malaysian and Thai dishes. It is closely related to ginger and turmeric and is similarly healthy. Galangal is rich in antioxidants. It may protect against cancer and have infection fighting qualities.

Its scientific name is Alpinia Galanga.

Botanically speaking, garden peas (A.K.A green peas) are actually fruit. But in culinary classifications, peas are vegetables (and one of the most common vegetables at that), so I’ve included them on this list of vegetables.

Garden peas are one variety of peas. They are the kind you often get frozen, where you only eat the pea, not the pod, as opposed to snow peas, which you eat whole, pod and all.

Their scientific name is Pisum Sativum.

Green peppers are bell peppers picked at their least ripe. Orange peppers are slightly riper and red peppers are the ripest! Peppers are super healthy. They contain many compounds that support your immune system and protect against cardiovascular disease.

The scientific name for bell peppers is Capsicum Annuum.

This is a small variety of summer squash that is about the size of a tennis ball. They are thought to have been bred from two wild squashes found in the Southern USA and Mexico. They are dark green and round.

Their scientific name is Cicer Arietinum.

Garden rocket is an easy leafy vegetable to grow at home. It has a peppery flavor and makes a great addition to salads. It is a good source of vitamin C and potassium.

Its scientific name is Eruca Sativa.

Did you know that China produces 76% of the world’s garlic? However, it has been used worldwide as seasoning for thousands of years. Even the Ancient Egyptians used it as both food and medicine.

The scientific name for garlic is Allium sativum.

This herb gets its name from the fact that it looks like chives but tastes like garlic! It is a popular choice in Chinese and Japanese cooking. It is thought that the Chinese have been cooking with garlic chives for the past 3000 years. Today, you can easily find garlic chives in the grocery store or grow them at home!

The scientific name for garlic chives is Allium Tuberosum.

The scientific name for cucumbers is Cucumis Sativus.

Ginger is a flowering plant. The root of this plant is used widely in cooking and in traditional medicine, particularly in Asian countries. The family that ginger belongs to (zingiberaceae) also includes turmeric, galangal and cardamom. Ginger is thought to have many health benefits, though its medicinal qualities have not been scientifically proven.

Its scientific name is Zingiber Officinale.

Gongura is grown in India, Fiji, for its edible leaves. There are two varieties of gongura: red stemmed and green stemmed. The red stemmed variety has a more sour taste than its green counterpart. Gongura has high nutritional value, being a rich source of vitamins, iron, folic acid and antioxidants.

Its scientific name is Hibiscus Sabdariffa.

Green Amaranth is part of the amaranth family. Its leaves are edible. They are best eaten when young as they become unpalatable as they age. Raw green amaranth leaves are somewhat bitter but once cooked, they lose their bitterness and take on a nutty, mild flavor. They are a good alternative to spinach.

Its scientific name is Amaranthus Viridis.

Green beans, also known as string beans, french beans or snap beans, are the unripe fruits of the common bean. They are long thin beans that are easy to grow in your garden! They form the basis of the popular Thanksgiving dish Green Bean Casserole.

Their scientific name is that of the common bean: Phaseolus Vulgaris.

Guar is a legume best known for the guar gum that it produces. Guar gum is used in fracking as well as to make paper and textiles – it has many industrial applications! Its leaves are also edible and it is used frequently as livestock feed.

Green onions, also known as scallions, are the bulbs of normal onions, harvested early while they are still young. Their flavor is sharp, a bit spicy and slightly peppery. When chopping green onions, the part you want to use is the white and pale green part at the bottom of the plant.

They go by the scientific name Allium Cepa.

Golden samphire grows on sea cliffs and salt marshes in Western and Southern Europe. Its leaves can be eaten raw or cooked.

Its scientific name is Limbarda crithmoides.

Green soybeans are what you probably know as edamame beans. They are basically immature soybeans picked when still green. They are typically steamed or boiled and eaten with salt!

The scientific name for soybeans is Glycine max.

Let’s end on a fun one! Good King Henry has been all but forgotten as a crop, though it was once very popular! It has also been known as wild spinach as it was eaten much in the same way as spinach. The popularity of spinach is partly responsible for it being edged out of people’s diets.

All parts of it are edible, though it does contain some oxalic acid, so if you are prone to rheumatism, arthritis or gout, you should avoid it!

Did you know there are 16 vegetables that start with G? From garlic & ginger to galangal and guar, learn them all here!

I hope you learned something new from this list of vegetables that start with G! What’s the best way you found to memorise the names of vegetables, if that’s what you were doing? Foods You Can Eat on a Ketogenic Diet for Weight Loss