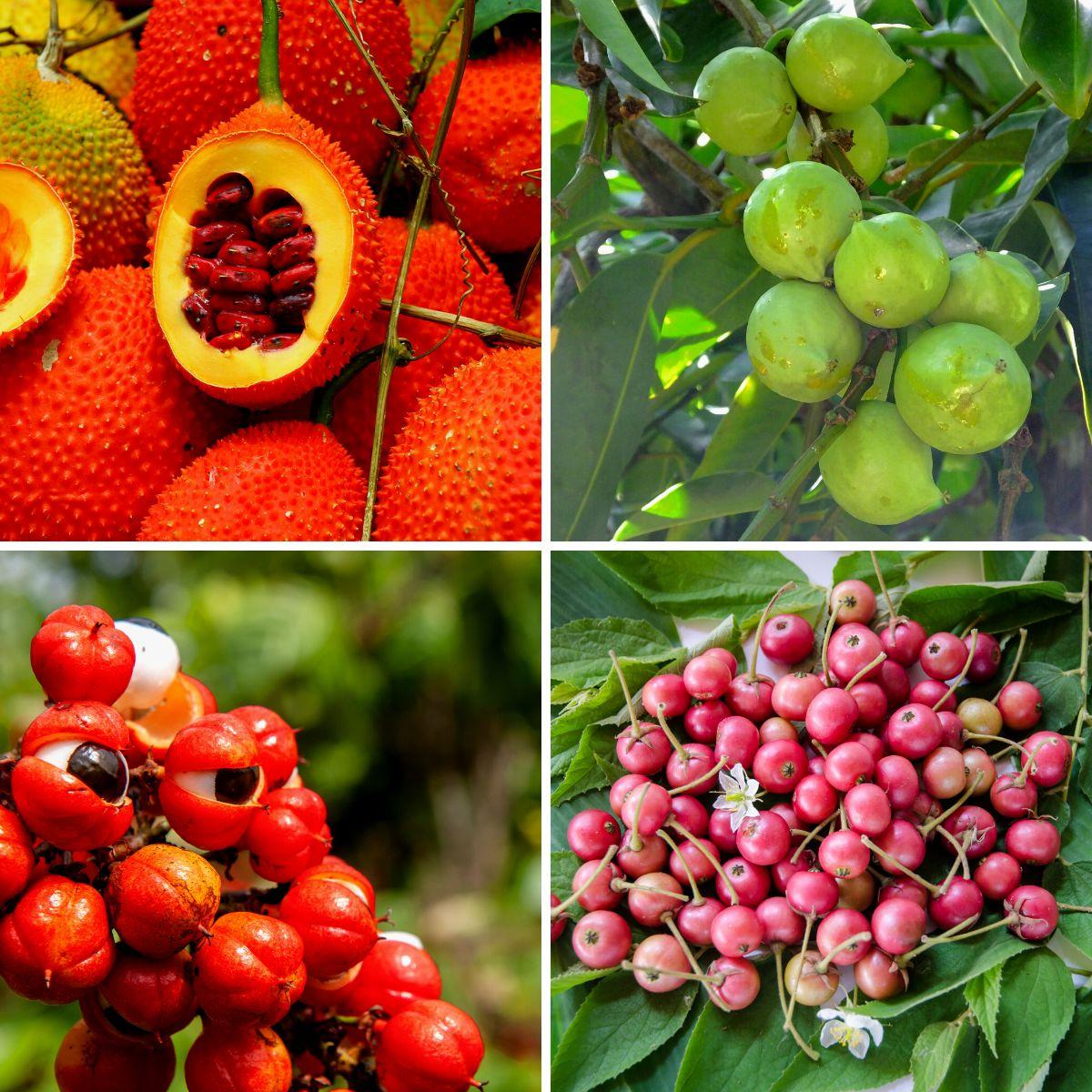 Whether you’re prepping for a pub quiz or just trying to expand your repertoire, you’re going to love this list of fruits that start with G! There are some funky ones on there – have you heard of gac? Or grumichama? You have now!

Before I get into naming the fruits that start with the letter g, let’s think about what constitutes a fruit. What makes the cut?

The scientific definition of a fruit is the mature ovaries of a flowering plant. By contrast, a vegetable is an edible part of a plant – so the roots, stem, leaves or shoots.

So, a fruit is something that grows on a flowering plant and contains the seeds of said plant.

Get memorising: fruits that start with G!

This is a popular type of apple which is widely available in the USA and Europe. It is sweet and crisp with red skin. In 2018, it overtook ‘Red Delicious’ as the highest selling apple variety in the USA.

Goji berries have become popular as a superfood in recent years. They are packed with antioxidants and have been used as medicine for years.

Some of the health benefits they are said to have include supporting your immune system and promoting eye health. They have extremely high quantities of Vitamin A! They are native to Asia.

Their scientific name is Lycium Barbarum.

Also known as the Brazilian cherry, these small dark fruits have a cherry or plum like flavor. They grown on a small tree in Southern Brazil. Though they are dark purple or black on the outside, their flesh is light coloured.

Their scientific name is Eugenia Brasiliensis.

It is thought that grapefruits are a naturally occurring hybrid citrus fruit between the sweet orange, and the Indonesian ‘pomelo’. This hybrid originated in Barbados. The hybrid probably came about as the result of colonisers bringing over pomelo seeds from Indonesia.

This isn’t actually an apple! ‘Golden apple’ is the Caribbean English, for a fruit the scientific name of which is ‘spondias dulcis‘. It is commonly known also as ambarella, june plum and cythere.

The fruit is green and hard when it falls from the tree, but once it falls, it ripens and acquires the golden yellow colour that earned it it’s name. Once ripe, the flesh is sweet, juicy and a little tart, somewhat like a pineapple-mango hybrid.

Golden apples are eaten in many parts of the world. In Indonesia, they are consumed with shrimp paste. In Jamaica and Granada, they are used to make a drink, spiced with ginger. In Samoa and Tonga, they are pickled with vinegar and chilis!

Did you know that botanically speaking, grapes are a berry? They were first cultivated in the Middle East around 8000 years ago and continue to be eaten across the world today. They are dried to make raisins, or fermented to make wine. Approximately 70% of the world’s grape production is used for wine.

The scientific name for grapes is vitis.

Guava is a tropical fruit native to South America and Central America. Botanically, they are also berries! They have green skin, pink flesh and a very distinctive flavor. They can be eaten raw, or used to make agua fresca, jams, jellies and pastries.

The scientific name for guava is Psidium guajava.

Gooseberry is the common name for the genus ‘ribes‘, which also includes currants. They can be green, orange, red, yellow, white or black. It is native to Europe and Western Asia. It is used in pies, crumbles and jams, or added to flavored drinks and fruit wines.

Its scientific name is Ribes Uva-Crispa.

This fruit, also known as ‘ramontchi’, is a small, inch thick berry with red/purple flesh. It can be eaten raw, turned into jam or jelly, or made into wine. It is native to much of Africa and parts of Asia.

Green apples, granny smith apples or sour apples are a type of apple that originated in Australia as a hybrid between wild and domesticated apple varieties. They have a more sour taste than other types of apples, making them popular cooking apples.

Their scientific name is the general name for domesticated apples ‘malus domestica‘.

Granadilla is related to passion fruit. It is larger, yellow instead of purple, and has transparent flesh, while passion fruit has yellow flesh. The name means little pomegranate in Spanish, because Spanish colonisers initially mistook them for tiny pomegranates.

This is a popular type of pear, with an egg-like shape and a sweet flavor. They are thought to have originated in Belgium.

Greek figs are small and round and can have a variety of skin colours, from blue-purple to yellow-green. They are generally sweet with a honeyed flavor. Greece is one of the world’s largest producers of figs and many different types of figs fall under the category of ‘Greek Figs’.

The scientific name for greek figs is figus carica.

Gac is technically a type of melon. It is grown in Southeast Asia and Northern Australia. They are pretty weird looking fruits! They are oval shaped with spiky, bright red skin.

They have a thick layer of yellow-orange flesh encasing dark seeds coated in a slimy red membrane. When eaten raw, they have a very bland flavor, which is enhanced by cooking. They are used in a variety of dishes, from sticky rice, to sauce.

It goes by the scientific name Momordica Cochinchinensis.

The scientific name of this banana is Musa Acuminata Grand Nain.

Another type of pear, the gorham pear was first bred in the USA, at the New York State Agricultural Experiment Station in 1910. It is a cross between two old pear varieties, Williams and Josephine de Malines. They are cone shaped with no neck, and russet skin.

This is another fruit grown in Southeast Asia. It is round and yellow with a sour but pleasant flavor. It can be eaten raw, blended into a tangy drink, or used in cooking. It is a popular replacement for tamarind, given their similar, sour flavor profile.

Its scientific name is Garcinia Mangostana.

This fruit is grown across the Caribbean, Central and South America. The fruits are small, round and green, with slippery light orange flesh, similar in texture to a lychee. They are extremely rich in iron and phosphorus.

Greengages are related to plums. They are smaller than regular plums and have green flesh. Their scientific name is Prunus Domesticus Subsp. Italica.

Goumi berries are cherry-like fruit that grow in China, Korea and Japan. When unripe they are sour and astringent, but they get dramatically sweeter as they ripen. Once fully ripe, they have a citrussy sweet flavor.

Their scientific name is Elaeagnus Multiflora.

The ground plum or buffalo plum is native to North America, and is part of the legume family. It has been used historically as food, but also as medicine for horses. Watch out though – the fruit is edible, but the rest of the plant is poisonous!

The scientific name of the ground plum is Astragalus Crassicarpus.

You might know guanabana as ‘soursop’. It is grown across the Americas. These large green fruits have white flesh and are described as tasting like a combination of strawberries and apple, with sour citrus flavors and a texture like a banana.

Its scientific name is Annona Muricata.

Guarana is a fruit native to the Amazon rainforest. It contains some of the highest concentrations of caffeine of any plant (more so than coffee!). It is popularly used in drinks, most famously the Brazilian soda ‘Guaraná Antarctica’.

The scientific name of guarana is Paullinia Cupana.

This fruit is not related to guava at all! They are small berries (about half the size cherries) from South and Central America, that come in a variety of colours from yellow to dark purple.

They are rich in vitamin C, and the colour of the berry is determined by the concentration of vitamin C in it, with the darker berries containing higher concentrations!

Its scientific name is Myrciaria Floribunda.

You probably haven’t heard of ground cherries, but you might have heard of physalis! They’re the same thing! The fruit is small, firm and orange, with a tart flavor. They are part of the nightshade family, the same family as tomatoes!

Physalis is actually their scientific name.

26 Fruits That Start With G (From Gac to Goji!)

Do you know what gac fruit is? Have you ever tried goumi? Learn these & more, in this list of fruits that start with g!

Did you learn something new? Let me know which ones surprised you in the comments! And if I’ve missed any fruits that start with G, please let me know! I’m always updating our alphabet lists! 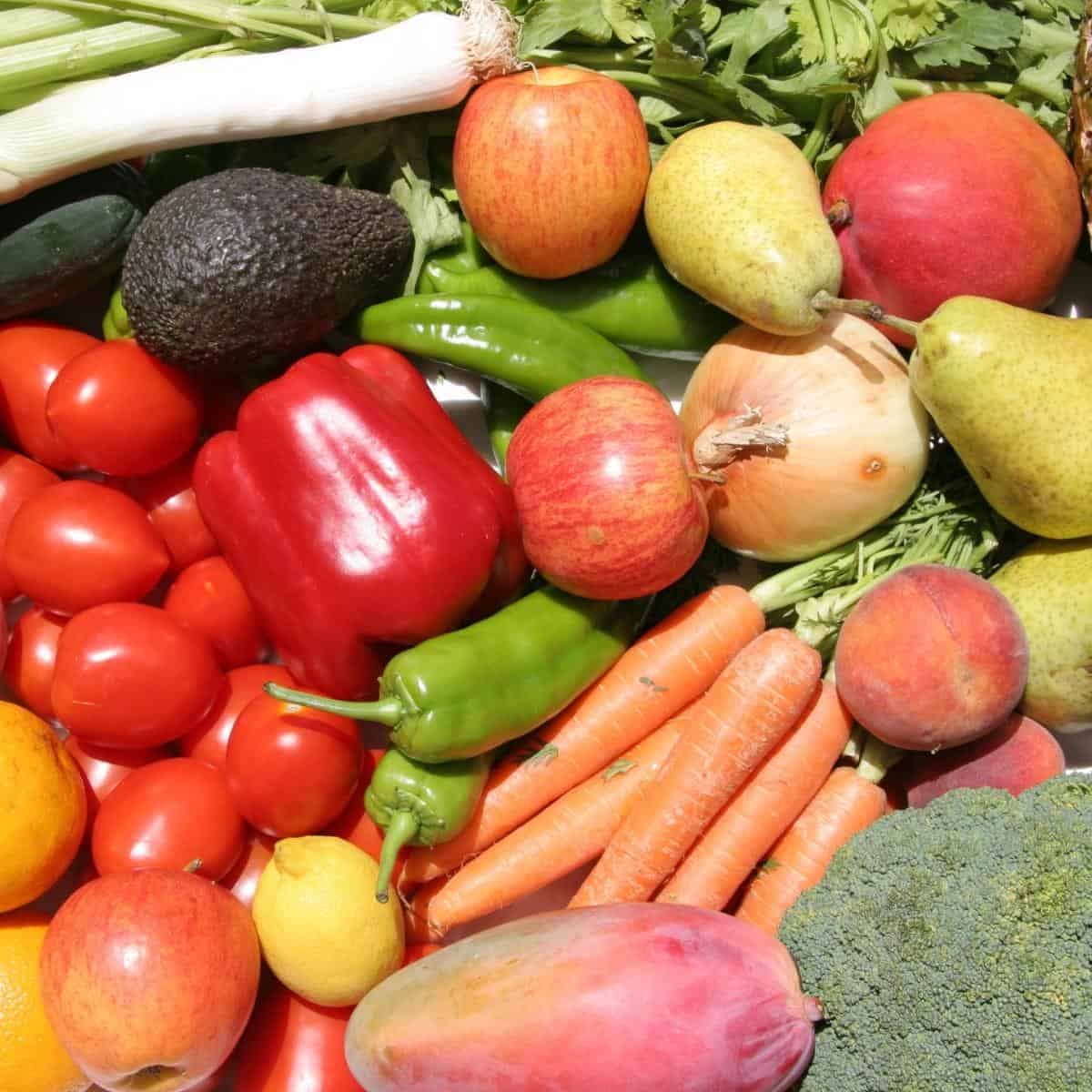 How to make kids love vegetables (and fussy adults too!

Acne And Your Blood Type Diet